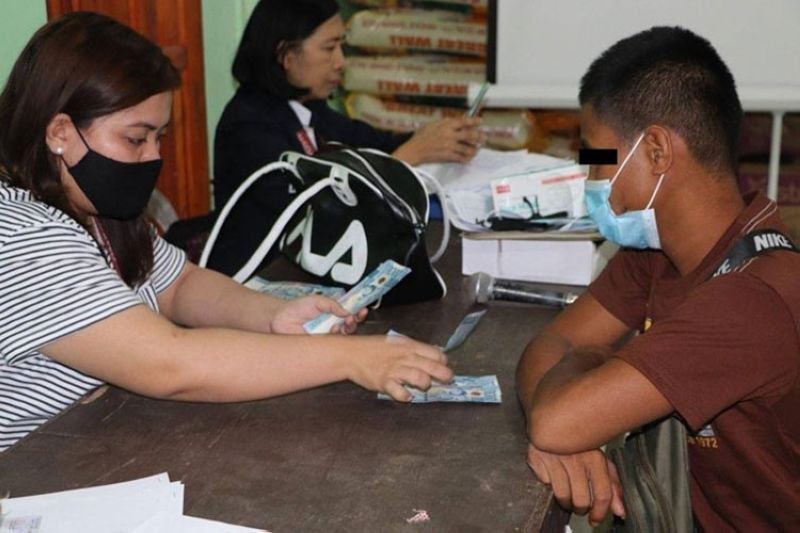 ZAMBOANGA. The Department of Social Welfare and Development (DSWD), through the Sustainable Livelihood Program, distributes P20,000 each to 11 former New People’s Army (NPA) rebels in Zamboanga del Sur. A photo handout shows a DSWD staff counting the money to be given to one of the beneficiaries. (SunStar Zamboanga)

The beneficiaries of the livelihood assistance are former NPA rebels who surrendered to the Army’s 53rd Infantry Battalion (IB).

Each of the 11 former NPA rebels received P20,000, or a total of P220,000 livelihood assistance from the DSWD-Zamboanga Peninsula, through the agency’s Sustainable Livelihood Program (SLP).

The payout of the livelihood assistance was facilitated by DSWD-SLP Provincial Coordinator Therese Maravel Arcenal, who was optimistic that more NPA rebels will surrender upon knowledge of the various government programs they can avail of.

Lieutenant Colonel Jo-ar Herrera, commander of the 53IB, has thanked the DSWD for the payout, saying it is a great help to the former rebels' transition to mainstream society.

The said 11 former NPA rebels have already undergone the required psycho-social activity by the Provincial Social Welfare and Development Office (PSWDO) and have already received P65,000 cash assistance each through the Enhanced Comprehensive Livelihood Integrated Program of the Department of the Interior and Local Government.

The DSWD’s SLP is aligned with the mandates of Executive Order No. 70 signed by President Rodrigo Duterte, which seeks to institutionalize the Whole of Nation approach mandating the creation of a Task Force to End Local Communist Armed Conflict. (SunStar Zamboanga)