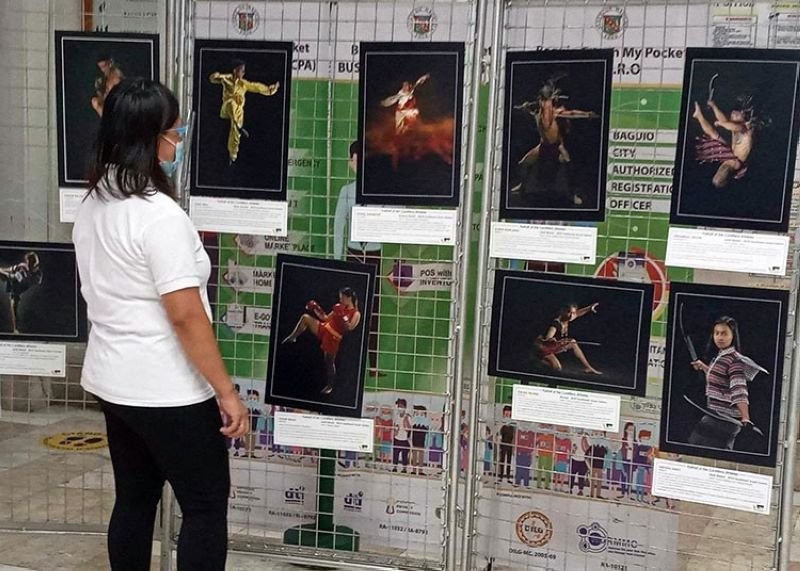 SPORTS EXHIBIT. On display this October at the Baguio City hall lobby is a photo exhibit of world-class Cordilleran athletes dressed in native attire in celebration of Indigenous People's Month. (Gaby Keith)

EIGHTEEN of the 41 athletes who won medals in the 2019 Southeast Asian Games were feted with a photo exhibit at the Baguio City Hall lobby Monday, October 19.

"We will work together in providing assistance to you our athletes," said Orcales which was backed by Cayabas.

Orcales said they are in the process of passing the sports code that will provide more assistance to athletes not only after winning but also in provision of the needed training and proper coaching.

Other athletes begged off since most are students and had classes during the opening ceremonies which was also a celebration of the Indigenous Peoples month here.

Sixteen of the 18 athletes featured belong to IP groups in the Cordilleras.

Photos of Nars Padilla, who wrote the Athletes Incentives Ordinance and former Gintong Alay camp director as well as Thai boxing promoter and philanthropist Naris Singwangcha were also feted. Singwancgcha for 10 years has helped create boxing champions from the Cordilleras including Alvin Tam, Dayer Gabutan and Rex Wa-o, to name a few.

The exhibit is part of the Heroes Portrait project that include murals of sports legends and the famed Team Lakay at the Baguio Athletic Bowl and backed by Davies Paints, BCF-UC Alumni Association, Singwangcha Foundation and the Benguet Electric Cooperative.

The murals will include the faces of sports legends Hector Begeo, boxer Rey Tam, judoka Jerry Dino, javelin queen Erlinda Lavandia and Muay Thai great Brent Velasco as well as future legends Dominguez and Wally. These murals will be done by artist Gladys Ann Labsan, who two years ago did portraits of many Cordillera athletes.