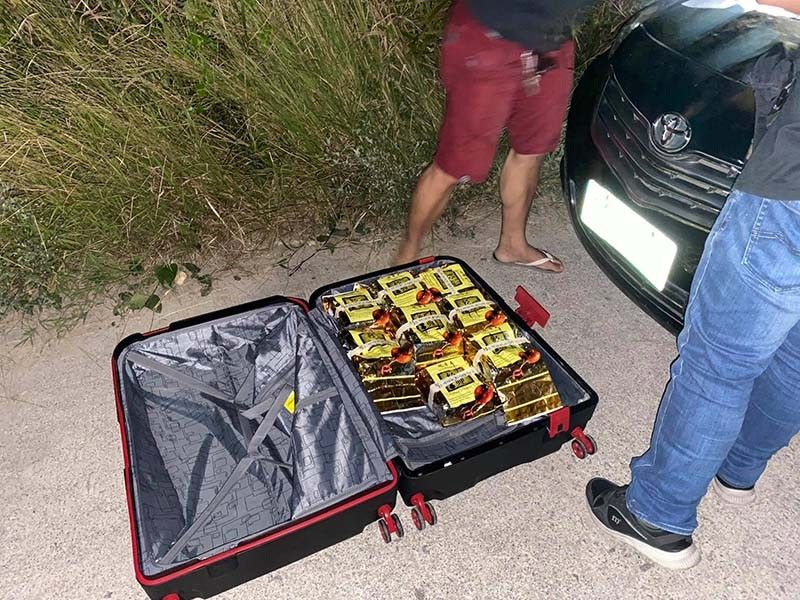 THE police seized around P160 million worth of illegal drugs and caught eight persons in separate anti-narcotics operations in the cities of Lapu-Lapu and Cebu in the past two days.

The biggest haul happened in Sitio Lawis, Barangay Subabasbas, Lapu-Lapu City on Wednesday, Oct. 21, 2020—the operatives seized over 22 kilos of white crystalline substance they believed to be shabu after they arrested a former Cebu City university teacher, who the police said abandoned his profession and descended into the narcotics underworld.

The contraband, worth around P150.2 million, possibly came from a Chinese syndicate christened by the local police as the Golden Triad. The police reached this theory because the illegal drugs were packed in tea bags printed with Chinese characters.

“We believe that those are from the Golden Triangle because of the packaging, a highly compressed tea pack. When I was the director of the PNP Drug Enforcement Group before, most of our seized drugs were in that kind of packaging,” said Police Regional (PRO) 7 Director Albert Ignatius Ferro.

However, not a single East Asian-looking person was caught in the operation carried out by the personnel from the Lapu-Lapu City Police Office, the PRO 7 and the National Capital Region Police Office (NCRPO)-Regional Special Operations Group (RSOG).

The person they caught was Gilbert Fuensalida Lumanog, the former teacher. His hometown is Pinamungajan, Cebu; however, he had been staying in Barangay Busay, Cebu City before his arrest.

The NCRPO tipped off the PRO 7 about a suspected drug shipment from Quezon City to Cebu, and the contraband was reportedly placed inside a black sedan.

After it received details about the vehicle, the PRO 7 operatives started to monitor the vehicle and the activities of its driver, who turned out to be Lumanog.

Last Oct. 12, the NCRPO-RSOG personnel arrived in Cebu to build a case. Two days later, the operatives tailed the black vehicle and they saw that the persons inside it delivered packages in different locations in Cebu.

The operatives received another information about a big shipment of illegal drugs that will arrive in Cebu. They decided to conduct a drug bust, which later led to the arrest of Lumanog and seizure of the illegal drugs.

In Cebu City, operatives from the Cebu City Police Office and the Regional Drug Enforcement Unit 7 seized nearly P9 million worth of illegal drugs in a one-time big-time operation.

The operation, which started Tuesday midnight and concluded Wednesday midnight, resulted in the arrest of seven suspected drug personalities.

The suspects will face complaints for violating Republic Act 9165, or the Comprehensive Dangerous Drugs Act of 2002. / AYB / MMC, BBT / CBQ