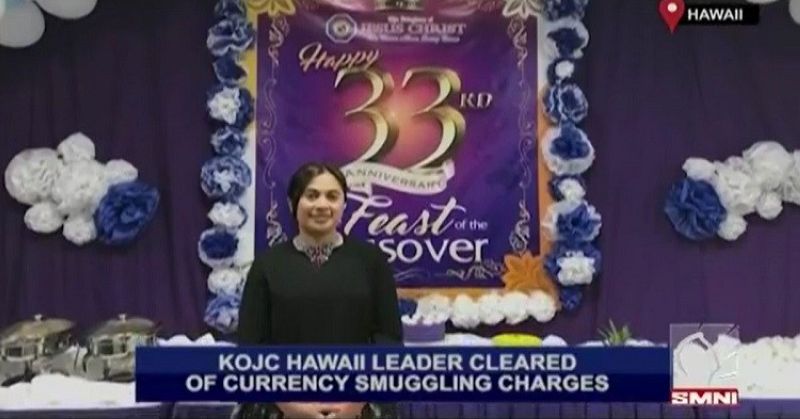 In a forwarded statement, KJC General Counsel Lawyer Michael Green said the dismissal is a “triumph” for their camp, wherein her sentence was reduced to merely a month of detention and a small fine.

“Justice has finally been served and the truth has been told,” Green said in a press release forwarded to the media.

According to Green, Hawaii Chief Judge Michael Seabright allowed her to serve the sentence in May 2021 "when the Covid-19 pandemic will be over and a vaccine will have been discovered."

The lawyer said Salinas’ sentence, handed down by the District Courthouse of Hawaii presided by Seabright in Honolulu, was the result of more than two years and eight months of litigation.

Green called it a “victory for Salinas and the Kingdom of Jesus Christ.”

"This clears the name of Pastor Apollo C. Quiboloy and the Kingdom of Jesus Christ of any charges,” the lawyer said.

According to a previous SunStar report, a US District Court complaint accused Salinas of bulk cash smuggling in 2018, a crime punishable by up to five years in prison and forfeiture of the cash and property.

Salinas was boarding a private jet with Quiboloy in Honolulu when federal agents seized a suitcase with $335,000 hidden in it. She told the agents the suitcase was hers.

She pled guilty to giving a false statement to a federal agent, claiming responsibility for the suitcase when she saw it was on board because it wasn’t supposed to be there.

Meanwhile, Green called Seabright’s decision “fair and balanced,” and ruled in favor of a one-month jail sentence for giving a false statement.

Green said Salinas "did not even know what the suitcase contained because they have proof of her email to a woman whom she knew handled the suitcase, asking her what was in the suitcase."

He added that the email proved to be "beneficial to Salinas’ defense."

“The Pastor did not know the suitcase was there, did not see it, was not even given a chance to claim it as his. Had he known it was there, he would have claimed it himself,” Green said.

The camp's lawyer said the verdict and the dismissal of the currency smuggling charges prove “that there was never any attempt to smuggle currency out of the United States.” (RGL with reports from SunStar Philippines and AP)