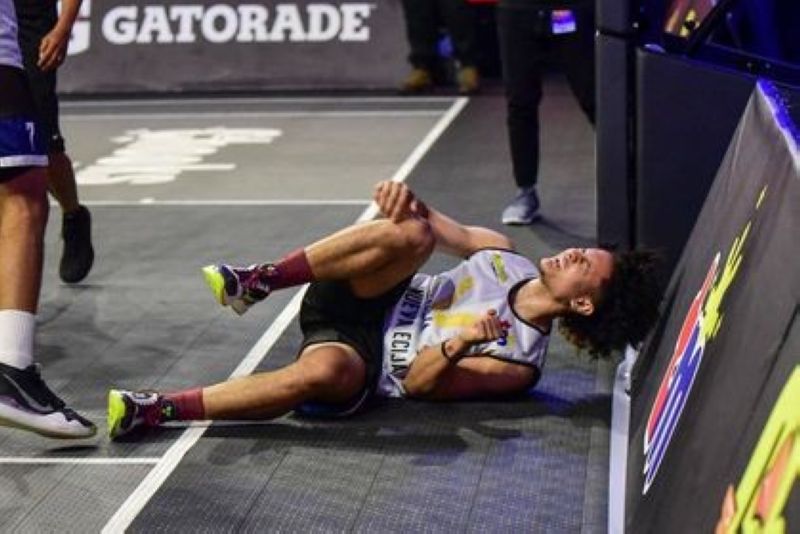 Nueva Ecija’s Juan Gomez de Liano is seen here writhing in pain after spraining his ankle when he landed on the foot of Bacolod’s Chris Lalata during their match in the first leg of the 2020 Chooks-to-Go Pilipinas 3x3 President's Cup last Wednesday. (Chooks-to-Go)

In the group stages of the first leg, the Rice Vanguards and Master Sardines figured in a heated battle that saw de Liano, the 20-year old superstar of the University of the Philippines, land on Lalata’s right foot after making a layup with 5:15 left in the game.

The lefty immediately crumped to the floor, clutching his ankle and had to be helped to the sidelines by tournament officials. He was eventually ruled out of the rest of the first leg and will also be missing the second leg on Friday, October 23, 2020.

Altamirano met with both de Liano and Lalata on Thursday to clear the air.

From the start, it was apparent Lalata felt bad about what happened.

"It was never my intention to hurt my opponent. I really am apologetic for what happened,” said Lalata during the meeting.

De Liano did not doubt Lalata had any intentions of hurting him but also questioned why the latter had to box him out when he had already made the layup.

"I know Chris. He's a nice guy. We were teammates in the D-League. I just want to understand why he needed to box out when the play already ended," de Liano said.

For his part, Altamirano agreed that it looked like Lalata intruded on de Liano’s landing spot.

"I understand that there was no intention but there is no doubt that you (Lalata) violated Juan’s (de Liano) landing spot.

Altamirano then reminded Lalata that this would be his final warning and a repeat of this incident will result in disciplinary sanctions. (JNP)