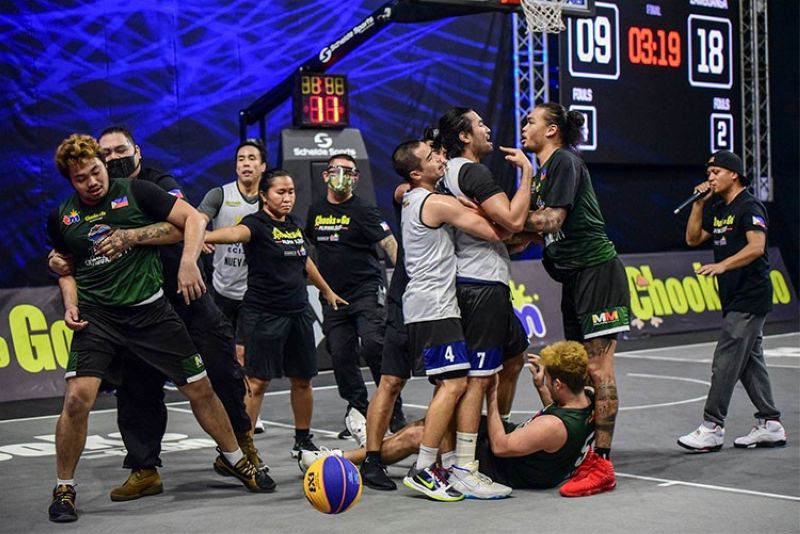 MANILA. Things between Zamboanga City and Nueva Ecija get heated in the championship game of the second leg of the 2020 Chooks-to-Go Pilipinas 3x3 President's Cup on Friday, October 23, 2020. (Chooks-to-Go)

ZAMBOANGA City-Family's Brand Sardines continue to show that they are heads and shoulders above the rest of the field, as they destroyed the Nueva Ecija Rice Vanguards, 21-11, in the finals of the second leg of the 2020 Chooks-to-Go Pilipinas 3x3 President's Cup on Friday, October 23, 2020, inside the Inspire Academy in Laguna.

Cebuano Leonard Santillan and Alvin Pasaol carried the scoring load for Zamboanga City, combining for 15 points to help Zamboanga City claim its second title in as many legs.

Pasaol, the super scorer from Davao, capped off his stellar night with a two-pointer over the outstretched arms of Tonino Gonzaga that clinched the win for Zamboanga City to help them continue to set the bar high in the country's first-ever 3x3 professional league.

Santillan, the University of the Visayas product, dropped five of his seven points in a four-minute period as Family's Brand Sardines went on a 12-5 tear to take a two-point edge and turn it into a sizable 18-9 lead. On the ensuing defensive rebound, Santillan was fouled by Gab Banal as the two fell to the floor and could not be separated.

Pasaol came to push Banal off and was then confronted by Gonzaga. Play was stopped for a while as game officials put the newly instituted video review system to good use.

Ultimately, Banal got a personal foul, while Pasaol and Gonzaga were called for unsportsmanlike and technical fouls.

Once play resumed, Zamboanga City did not let their foot off the pedal as Pasaol closed the door on them for good with the dagger in the face of Gonzaga's defense.

This latest championship netted Zamboanga City P100,000 more, hiking their winnings so far to a total of P250,000.

Even with the runner-up finish, the Rice Vanguards are P100,000 richer as well since Bounty Agro Ventures Inc. president Ronald Mascarinas pledged the amount to whoever the opponent is whenever Family's Brand Sardines makes the Finals.

Banal topped the scoring column for them with seven points, while Jai Reyes cooled off quite a bit with only three markers.

The two teams though had to dig deep to make it to the championship round.

Zamboanga City needed a 12-2 run just to get through a gritty Butuan City-Uling Roasters, 21-18, in the semifinals and before that, Family's Brand Sardines had to top sister squad Bacolod-Master Sardines, 21-16, in the quarterfinals.

For their part, Nueva Ecija needed Reyes' game-winner to oust red-hot Bicol, 21-19, in the quarters before taking down Pasig-Sta. Lucia Realtors, 22-13, in the semis.