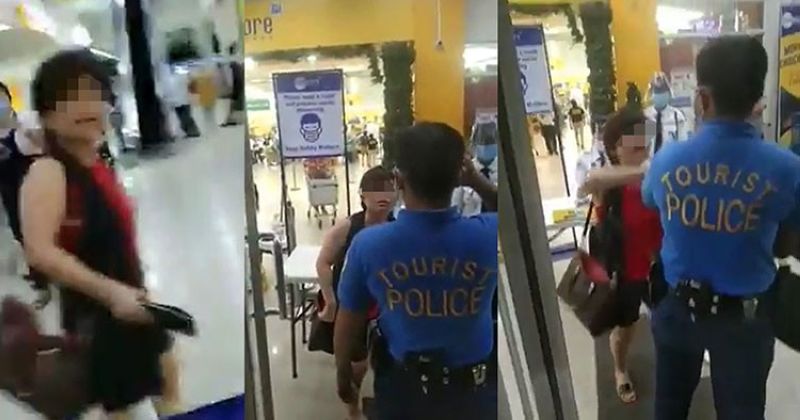 A WOMAN will be facing four cases in court after she went wild inside a grocery store when the police reprimanded her for not wearing a face mask and a face shield.

As of press time Friday, October 23, 2020, the woman was already detained at the Talomo Police Station while cases against her are being prepared for filing in court.

Based on the spot report of the Davao City Police Office (DCPO) through the Talomo Police Station, the suspect is a 48-year-old businesswoman and resident of Peace Avenue, Bangkal, Talomo, Davao City.

She will face charges for violations of Republic Act (RA) 11332 or the "Mandatory Reporting of Notifiable Diseases and Health Events of Public Health Concern Act," Executive Order (EO) 55 Series of 2020 of Davao City pertaining to the implementation of community quarantine, direct assault, and alarms and scandals.

DCPO spokesperson Police Captain Rosario Aguilar said they do not practice favoritism in enforcing the law.

She added that the suspect was immediately brought by the mobile patrol to the Tourist Police at the Precinct 3 of the Talomo Police Station on October 22 after she went hysterical at a grocery store in Bangkal.

The incident went viral on social media when videos of her going mad were posted. The videos showed that she was barred entry by the tourist police to the grocery store since she was not wearing a face mask and a face shield.

But she kept on insisting and forced her entry to the store. She was even seen shouting, pointing at, and whacking a police officer before she was led to the mobile patrol and brought to the police station.

"Gikustodiya nato karon ang nahisgutan, ug giproseso ang kaso, upat ka mga kaso nga iyang atubangon, hinuon puwede siya maka-bail niini (We are detaining the suspect and cases are being processed against her, she will be facing four cases although these are bailable)," Aguilar said when interviewed by Superbalita Davao Friday morning through a phone.

She added that the suspect is notorious for her attitude especially when she is being publicly reprimanded.

She also noted to file blotter reports against police officers who would try to admonish her when she is violating city laws and regulation.

Davao City Public Safety and Security Command Center (PSSCC) chief Angel Sumagaysay said in a phone interview that they have yet to get the details on the incident.

But Sumagaysay said should a similar incident occur within an establishment, he advised employees and security marshals within the vicinity to call the police for them to pacify the situation.

In case the individual would still resist leaving the premises, he said police can arrest them, in accordance with the Bayanihan to Recover As One Act, or the Bayanihan 2 law.

He also said the penalties of the city's Mandatory Face Mask Ordinance would also apply.

Meanwhile, he reminded the public to abide by the mandatory wearing of face shields and face masks to curb the spread of Covid-19.

He said establishments have the right to bar entry of individuals who will not wear face masks and face shields.

Mayor Sara Duterte-Carpio had been urging establishments, particularly in groceries and wet markets, to strictly impose health measures as these areas are highly vulnerable to Covid-19 transmission.