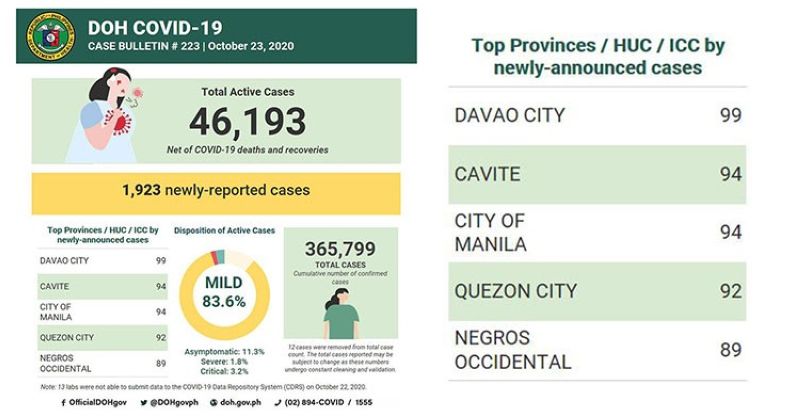 DAVAO City recorded the highest number of new Covid-19 cases in the country in a single day with 99 new cases on Friday, October 23.

The city is followed by Cavite and Manila with 94 new cases each, Quezon City with 92 new cases, and Negros Occidental with 89 new cases.

Before topping the areas with newly reported cases, Davao City surfaced at the third spot on October 22, wherein the city recorded 76 new cases.

As of Thursday evening, October 22, Davao remains to be the Covid-19 hotspot in the region with 716 active cases.

DOH-Davao recently reported that the city's Covid-19 growth rate is steadily rising for the past two weeks.

Based on DOH-Davao's data as of October 15, the city's current two-week growth rate is at 60.10 percent, compared to the 43.60 percent recorded in the past three to four weeks.

DOH-Davao Assistant Director Lenny Joy Rivera said on Friday, October 16, in the One Davao on Covid-19 virtual presser that the two-week growth rate is a measurement that shows how quickly the number of cases is changing in the two-week period.

Meanwhile, the city's daily average attack has increased from 1.2 to two percent.

This was the reason why Davao City Mayor Sara Duterte-Carpio reimposed the curfew in the city, to regulate the movement of people which is attributed to the widespread transmission of the virus.