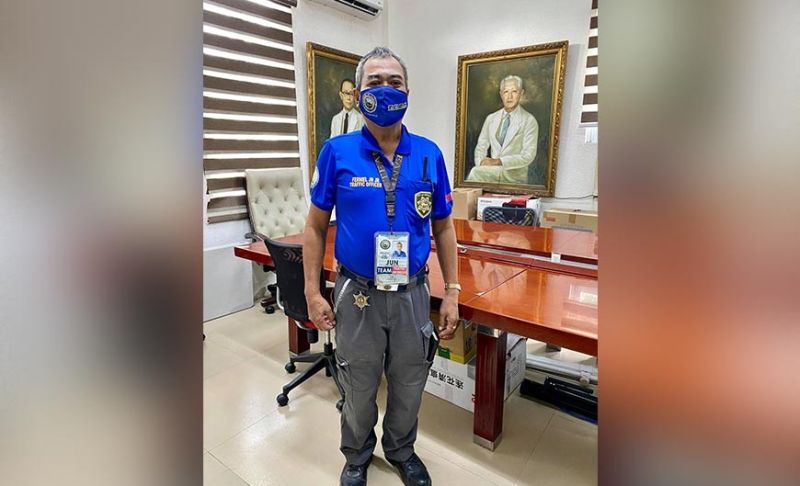 HONEST ENFORCER. Jose Feraniel Jr., who works as a traffic enforcer under the Traffic Enforcement Agency of Mandaue (Team), was honored by the city after he returned cash checks worth P1.1 million while manning the streets of Barangay Maguikay on Thursday, Oct. 22, 2020. (Contributed)

A TRAFFIC enforcer was honored by the Mandaue City government for his honesty after he returned cash checks worth P1.1 million that he had found on the corner of M.C. Briones and M.D. Echavez streets in Barangay Maguikay.

Jose Feraniel Jr., who works as a traffic enforcer of the Traffic Enforcement Agency of Mandaue (Team), was on duty at the area on Thursday afternoon, Oct. 22, 2020, when he noticed pieces of paper flying on the street.

When he checked one of the pieces of paper, Feraniel was surprised to find a cash check.

After gathering all of the paper, Feraniel was even more surprised to find that they were all cash checks amounting to P1.1 million.

Arnold Malig-on, the Team operations head, said one of their personnel was able to trace the owner of the checks and they immediately contacted him.

Malig-on said when he was able to contact the owner, the latter told him that he lost the checks after he placed them on his belt bag while collecting his customers’ dues.

After the call, Malig-on said they personally turned over the checks on Friday, Oct. 23.

Malig-on said that he can really see that their traffic enforcers are not only effective in manning the traffic but are also honest and true to their work.

Although not expecting any rewards, Feraniel has continually delivered his work efficiently and truthfully.

To honor Feraniel, Mandaue City Mayor Jonas Cortes has invited him to his office on Monday, Oct. 26. (KFD)