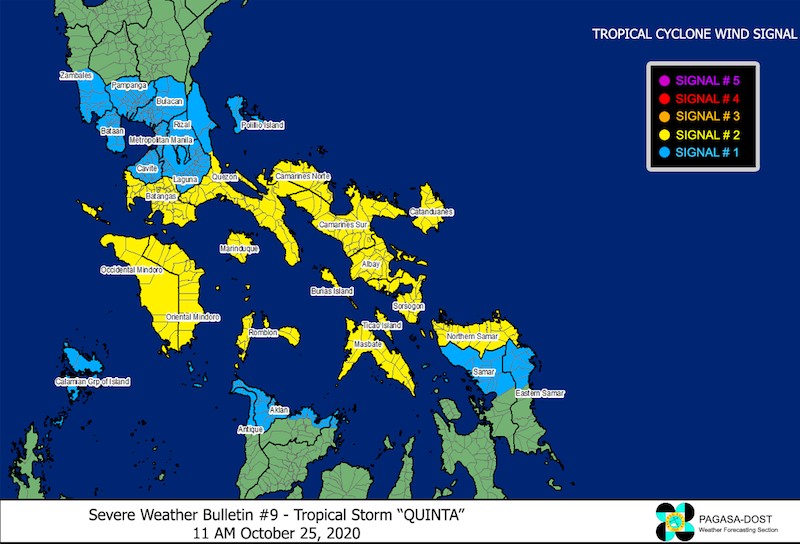 With maximum sustained winds of 95 kilometers per hour (kph) near the center and gustiness of up to 115 kph, “Quinta” threatens Catanduanes, Albay and Sorsogon provinces in Bicol region, where it was forecast to make landfall.

As of 10 a.m., it was spotted at 180 km. east of Virac, Catanduanes and was moving westward at 25 kph. Pagasa said it will further intensify into a typhoon by Tuesday, but was expected to exit the Philippine area of responsibility by Tuesday afternoon, October 27.

The tail-end of a frontal system will likewise bring moderate to heavy with at times intense rains over Cagayan, Isabela, Apayao, and Ilocos Norte.

Flooding (including flash floods), rain-induced landslides, and sediment-laden streamflows (i.e. lahars) may occur during heavy or prolonged rainfall especially in areas that are highly or very highly susceptible to these hazards.

Pagasa has placed the following areas under Tropical Cyclone Wind Signal (TCWS) no. 2 (61 to 120 kph winds prevailing or expected in 24 hours):

Gale conditions will be experienced in these areas.

TCWS no. 1 (30-60 kph winds prevailing or expected in 36 hours) is hoisted over the following:

Strong breeze to near gale conditions will be experienced in these areas.

Strong breeze to gale conditions will also prevail over Batanes, Babuyan Islands, and the northern coastal areas of Ilocos Norte and mainland Cagayan due to the northeasterly surge.

Pagasa also warned of storm surge of one to two meters in the coastal areas of Northern Samar, Bicol Region, and the central and southern portions of Quezon.

Sea travel is risky over these waters, especially for small seacraft.

Moderate to rough seas (1.2 to 2.8 m) will be experienced over the other seaboards of the country Sunday. (MVI/SunStar Philippines)
< Previous PageNext Page >