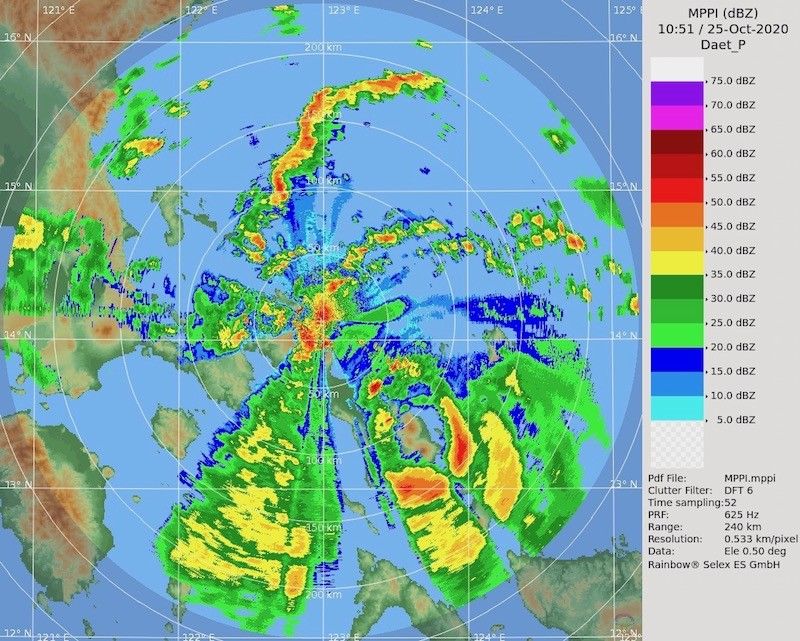 TYPHOON Quinta (Molave) made its second landfall in less than an hour over Malinao, Albay.

The typhoon, which intensified from a storm to a severe storm and further to a typhoon in less than a day, hit land for the second time at 6:50 p.m. Sunday, October 25, 2020.

It first made landfall at 6:10 p.m. over San Miguel Island, Tabaco City, Albay.

These areas were under Tropical Cyclone Wind Signal (TCWS) no. 3 as of 5 p.m. Sunday.

Pagasa said severe flooding was expected in flood-prone areas and near river channels. Landslides were possible in landslide-prone areas.

An orange rainfall warning was issued over Palawan (Cuyo, Magsaysay and Agutaya).

Light to moderate to at times heavy rains were being experienced over Masbate, Oriental Mindoro, Marinduque and Romblon as of 7 p.m. Sunday.

Storm surge of one to two meters in height was expected in the coastal areas of Northern Samar, the rest of Bicol region, Polillo Islands, southern portion of Quezon, Batangas, Marinduque, Romblon and Mindoro provinces.

At 4 p.m. Sunday, the typhoon was packing maximum sustained winds of 130 kilometers per hour (kph) near the center and gustiness up to 160 kph. It was moving westward at 25 kph.

The Albay Provincial Disaster Risk Reduction and Management Council has announced the suspension of distance learning classes and work in public and private sectors in the entire province on Monday, October 26, 2020. (Marites Villamor-Ilano/SunStar Philippines)