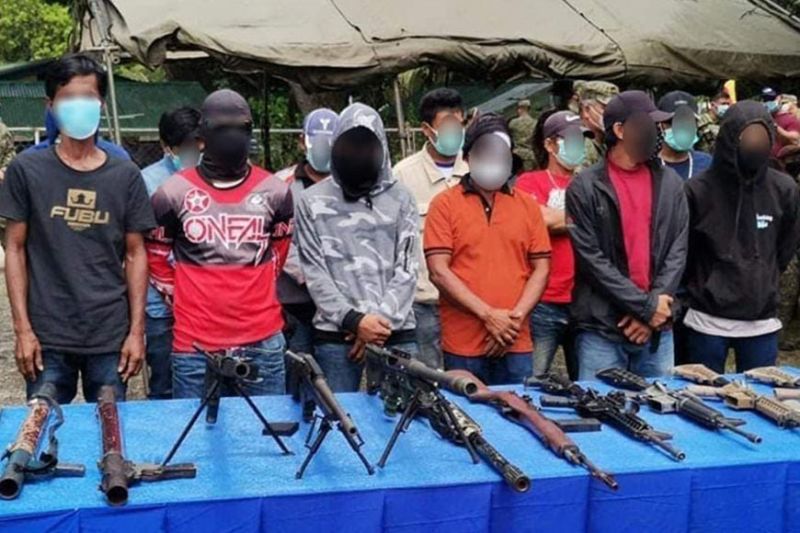 ZAMBOANGA. A field commander and eight others, including a bombmaker, of the Bangsamoro Islamic Freedom Fighters (BIFF) surrender Saturday, October 24, to government authorities in Maguindanao. A photo handout shows the BIFF surrenderers and the high-powered firearms they turnover. (SunStar Zamboanga)

A FIELD commander and eight followers, including a bombmaker, of the Bangsamoro Islamic Freedom Fighters (BIFF) have surrendered brought about by pressures of an intensified military offensive against them in Maguindanao, officials announced Sunday, October 25, 2020.

Vinluan said they surrendered Saturday to the 57th Infantry Battalion and have turned over high-powered firearms that include one M4A1 Carbine, one caliber 5.56 millimeter (mm) Bushmaster, one caliber 5.56-mm Heckler and Koch 416, one M-16 Armalite rifle, one M-14 rifle, two Homemade caliber 50 Sniper rifles, and two Homemade Rocket Propelle Grenades with two ammunition.

Vinluan said the surrenderers were involved in the series of armed engagements in March this year in Salman village, Ampatuan, Maguindanao.

He said they were also involved in harassment and clashed in Maguindanao and North Cotabato provinces.

Vinluan said they were exhausted and had nothing to eat due to the continuous combat operations against them.

“This success is attributed to the collaborative efforts of the military, local government units, the traditional leaders and the peace-loving people of Maguindanao,” Atencio said.

Uy vowed support to the surrenderers in their reintegration into mainstream society. (SunStar Zamboanga)