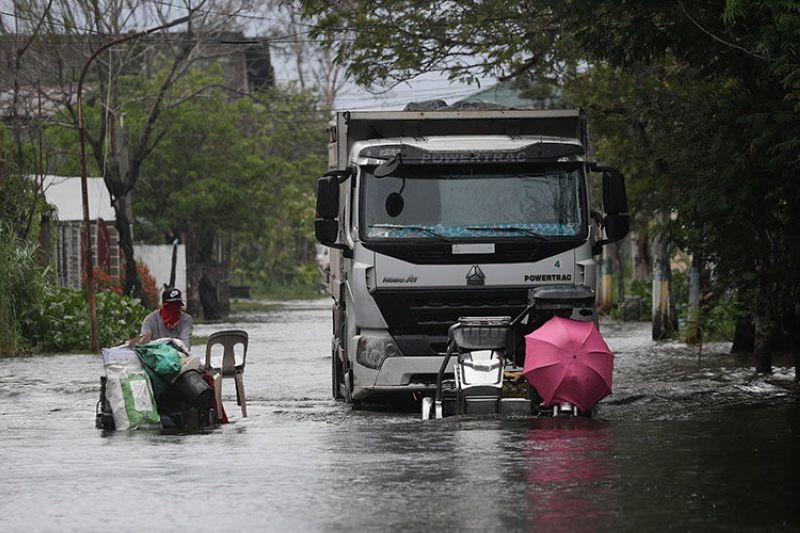 PAMPANGA. Motorists with an umbrella negotiate a flooded road due to Typhoon Quinta (Molave) in Pampanga province on Monday, October 26, 2020. (AP)

ONE person died in Cagayan Valley while over 40,000 individuals were displaced as Typhoon Quinta (Molave) barreled through several regions in the country, Philippine National Police (PNP) Chief Camilo Cascolan said on Monday, October 26, 2020.

The Philippine Coast Guard (PCG) has also launched search and rescue operations for one of the eight crew members of the yacht MV Oceanic 3 Explorer, which sank in the waters off Keppel Shipyard in Bauan, Batangas at around 7 a.m. Monday. The seven other crew were rescued.

The PCG also rescued five crew members of MV RoRo 12, which ran aground near Bonito Island in Maricaban, Batangas at around 8 a.m. Monday.

Cascolan did not give details about the lone fatality, but said most of the displaced individuals were in Bicol and Calabarzon regions, which bore the brunt of the typhoon. There were 36,456 evacuees in Bicol and 3,542 in Calabarzon.

There were also 88 evacuees in Cagayan Valley, 571 in Mimaropa (Mindoro, Marinduque, Romblon and Palawan), and 25 in Eastern Visayas.

Cascolan said a total of 3,558 persons were stranded in Calabarzon, Mimaropa, Bicol and Eastern Visayas after boat trips were cancelled due to bad weather.

He said 105 areas were flooded in Cagayan Valley, Central Luzon, Calabarzon and Bicol Region. At least 16 roads were not passable due to flooding and debris.

As of 12 p.m. Monday, the PCG said the following have been stranded in Calabarzon, Bicol, and Eastern Visayas regions: 577 passengers, truck drivers, and cargo helpers; 473 rolling cargoes; 21 vessels; and 10 motorbancas.

There were also 121 vessels and 51 motorbancas that were taking shelter as a precautionary measure.

Authorities were clearing roads of fallen trees and debris in some towns after the typhoon passed, he said.

Cascolan said he has ordered police commanders in the areas along the path of the typhoon to initiate proactive response measures in coordination with the local government units and other concerned national and local agencies.

“The police stations are doing their best to basically respond to all the flooded areas. We have also re-echoed the directive that we should be able to force evacuate those who are in high-risk areas most especially for flooding,” he said in a press briefing.

“Hindi po naman kumpleto ang equipment but we are trying our best to at least be able to help and respond to those who are in need,” he added.

Cascolan said a total of 1,129 PNP search and rescue personnel were deployed in the affected regions while 6,359 more were on standby.

He said policemen were also deployed to ensure peace and order in evacuation centers as well as in communities where residents flew to avoid looting and other possible crime incidents.

At 10 a.m. Monday, state weather bureau Philippine Atmospheric, Geophysical and Astronomical Services Administration (Pagasa) said Quinta was spotted at 125 kilometers north of Coron, Palawan with maximum sustained winds of 125 kilometers per hour (kph) near the center and gustiness of up to 150 kph. It continued to move westward at 25 kph.

About 20 typhoons and storms annually batter the Philippines, and the Southeast Asian archipelago is seismically active, with earthquakes and volcanic eruptions, making it one of the world’s most disaster-prone countries. (With a report from AP)