Angeles execs' live selling for a cause yields P34,000 sales 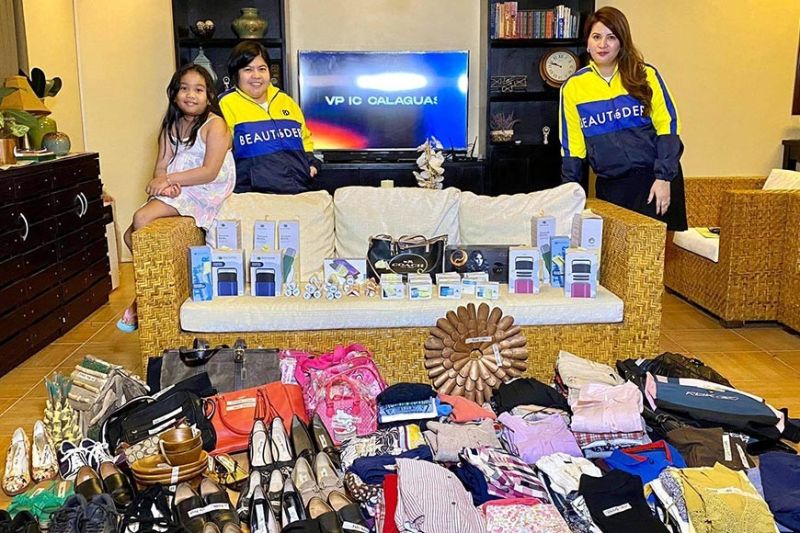 The proceeds will benefit Baby Angel, a four-year-old girl from Barangay Sapangbato, Angeles City who is suffering from hydrocephalus.

During the live selling, the local executives mentioned how they were able to know the situation of Angel.

Calaguas, who is also the chief adviser and tactician director of Mayor Carmelo Lazatin Jr., told the viewers that during one of the visits conducted by the City Government in Barangay Sapangbato, one of Lazatin's senior staff -- Gender and Development Officer Mina Cabiles, saw Baby Angel and her condition.

According to Calaguas, they have also coordinated with surgeon Dr. Vic Lugue and Rafael Lazatin Memorial Medical Center (RLMMC) officer-in-charge Dr. Froilan Canlas for the other medical needs of Baby Angel.

The live selling for a cause, which premiered live for almost three hours at the Facebook pages of Pepper's Closet PH and Mahal na Reina, flashed personal preloved and brand new items of Calaguas and Manuel, such as clothes, shoes and bags at affordable prices.

Calaguas has expressed her gratitude to Lazatin and CIAC President and Chief Executive Officer (CEO) General Aaron Aquino for donating P10,000 each to Baby Angel, as well as to the "miners" who supported the live selling for a cause.

Manuel also cited the generosity of some private individuals who wanted to remain anonymous.

The IBAC Wood Crafts local merchandiser also donated their own products to be sold at the live selling.

The local executives, who are also Beutéderm Ambassadresses, thanked the corporation CEO Rei Anicoche-Tan for sending her own products, which were raffled off for miners.

Baby Angel is the second child with hydrocephalus who will receive assistance from Calaguas and Manuel.

It can be recalled that Baby Sean, an eight-year-old boy from Barangay Pulung Cacutud who has hydrocephalus, was the first recipient of assistance from Calaguas and Manuel. He received the proceeds from Bella's paintings, which were exhibited at the One Town, One Product store of the City Government.