Hundreds flee homes due to flooding 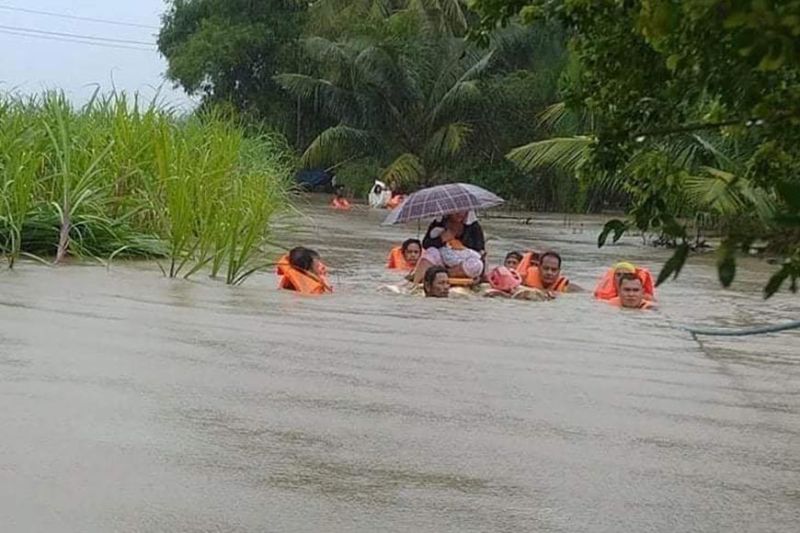 In the town of Hinoba-an, the local Disaster Risk Reduction Management Office (DRRMO) reported that heavy rains have poured since the early afternoon of Sunday, causing flooding in the villages of San Rafael, Talacagay, Bulwangan, and Poblacion 1.

The local DRRMO immediately deployed its personnel, who conducted house-to-house visits along with local barangay officials, urging residents to evacuate immediately as the water level was rising.

Thirty-seven personnel from the Philippine Coast Guard (PCG) Sub-station in Hinoba-an were placed on standby for rescue operations.

By 8 p.m., the Hinoba-an DRRMO reported that a total of 50 families left their homes in Poblacion 1, Bulwangan and Talacagay.

The affected families took shelter in the covered courts of their barangays and barangay hall.

In the town of Isabela, the town's DRRMO reported flooding in the villages of Maytubig, Rumirang, Poblacion 5.

A total of 457 individuals were sheltered at the town's Socio Cultural Center. In Barangay Amin, several residents were also reported to have been stranded after the water in the village's overflow facility rose, cutting off access.

A power outage was also reported in the said barangay.

In the town of Moises Padilla, Mayor Ella Celestina Garcia-Yulo said around 46 families were evacuated to the town's auditorium following a flash flood at the stockyard of Barangay 1 around 10 p.m.

The town's Department of Social Welfare and Development led the relief efforts by providing hot food and drinking water to the affected families.

In Sipalay City, personnel from the City DRRMO, together with the Sipalay City Fire Station, evacuated several residents in Purok Dalipi, Barangay Maricalum.

The affected residents were assisted to cross the river and were immediately brought to the evacuation center for the night.

In Binalbagan, personnel of the Binalbagan Municipal Disaster Risk Reduction and Management Office (MDRRMO) rescued over 50 individuals, including a month-old baby boy, in Sitio Aslum in Barangay Marina, Binalbagan on Monday, October 26.

Engineer Jernie Rondin, head of Binalbagan MDRRMO, said a total of 56 individuals were evacuated and temporarily housed in a health facility and compound at the hacienda.

Rescuers used improvised "balsa" to rescue the residents as the government's speed boat failed to penetrate the area.

Floodwaters that were at least five foot deep inundated the community following the heavy downpour in the upland areas of the town, he added.

As of press time, the PDMPD said the affected local government units were still assessing the damage caused by the flooding.