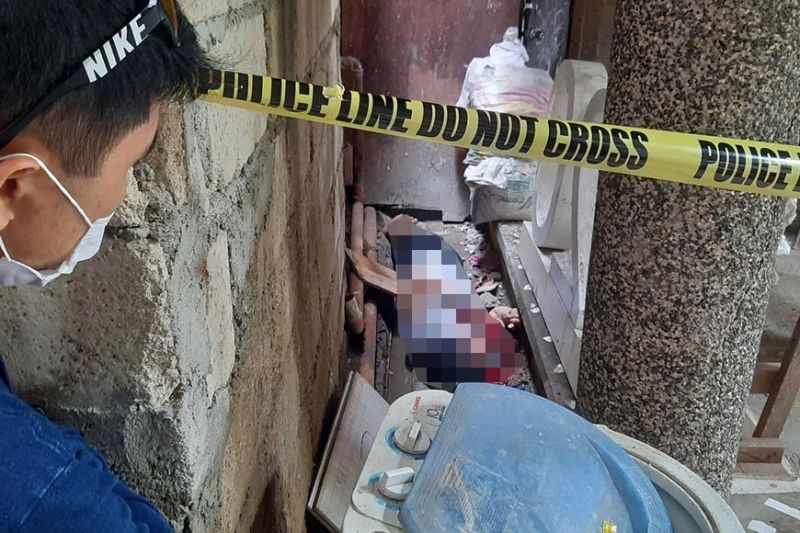 SHOOTOUT VICTIM. The body of Roberto Cadu Ludong lies in a pool of blood after he allegedly tried to engage police in a shootout in Sitio San Vicente, Barangay Luz, Cebu City on Monday morning, Oct. 26, 2020. Ludong and two others escaped from the Mabolo Police Station detention cell hours earlier. (Arnold Bustamante)

The fatality was identified as Roberto Cadu Ludong.

According to Maj. Dindo Alaras, chief of the Mabolo Police Station, they immediately conducted a manhunt after Ludong and two others escaped past midnight on Monday.

Later that morning, they received a call that the three escapees were spotted on Cabantan St., he said.

When police arrived at the scene, the three escapees fled to the interior portion of the sitio.

Ludong was seen running across the shanty roofs. After he climbed down, he allegedly tried to shoot at the police. They were able to shoot him first, which resulted in his death.

“They scampered in different directions when they saw the police. One team was able to track Ludong who climb up the roof of a house. When he got back on the ground, he pulled out a gun,” Alaras said in Cebuano.

Police caught Oliver Basak, one of the escapees. The other one, Nico Baylosis, remains at large.

Ludong was arrested on Sept. 19, 2020 and was charged with smuggling illegal drugs. He was supposed to be transferred to the Cebu City Jail in Barangay Kalunasan but police were still waiting for the result of his swab test for the coronavirus disease 2019.

Alaras said the escapees sawed through the cell bar, which allowed them to get out.

He said station personnel did not notice their escape because it was raining heavily.

The three escapees were detained with 42 others at the Mabolo Police Station. They were all waiting for their swab results so they could be transferred to the Cebu City Jail.

Alaras said only Ludong, Basak and Baylosis escaped since they were the only ones who could fit into the sawed through portion of the cell bar.

He said police personnel who were on duty at the time of the escape will face an administrative complaint.

If found liable during the investigation, they will be dismissed from the force, said Cebu City Police Office (CCPO) Director Col. Josefino Ligan.

“Definitely, they have administrative liability because the three men wouldn’t have been able to escape if there was no lax in security,” Ligan said in Cebuano.

As of press time, police were still looking for Baylosis.

Ligan said they consider Baylosis to be armed and dangerous.

After the incident, the CCPO director ordered all the city’s 11 police stations to carry out a search of their detention facilities to make sure there are no contraband like a saw that could be used to cut through steel bars.

He also ordered all chiefs of police to check visitors bringing food for detainees because of the possibility that the contraband may be smuggled in this way. (AYB / PJB)