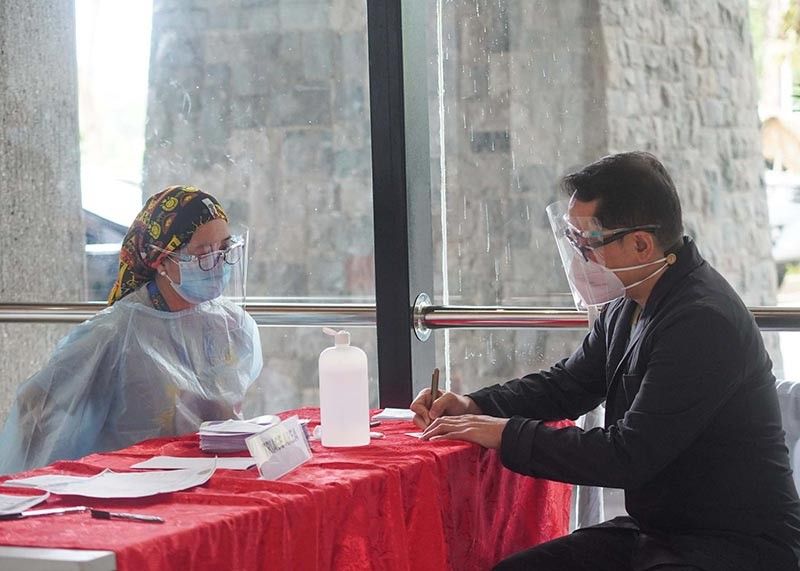 PROTOCOL. A man undergoes triage upon entry at the Baguio Convention Center. All establishments require the public to wear face masks, face shields and fill out health declaration forms in order to curb the spread of Covid-19. (Jean Nicole Cortes)

BAGUIO City remains on the list of high-risk Covid-19 areas, based on the updated study by the Octa team of researchers.

Octa research, a group of academics from the University of the Philippines and the University of Sto. Tomas, has been doing research on Covid-19 in the country. It conducted a study from October 4 to 17 for local government units (LGUs) outside the National Capital Region and ranked the municipality of Itogon, Benguet as number one and Baguio City as fourth in terms of attack rates.

The classification of high-risk is based on high daily case load, high attack rate and/or high hospitalization occupancy.

The Octa team study showed Itogon has a Daily Attack Rate (per 1,000 population) of 11.6 percent, while Baguio has a 10.2 percent attack rate.

The team findings show concern for both areas.

“We list LGUs of concern based on high cases per day, high attack rate, and/or high hospital occupancy. We are concerned that these LGUs may experience high hospital burden in the coming weeks that may stress their health care systems and overwhelm their medical front-liners,” the Octa research said.

For areas with the most cases per day outside the National Capital Region (NCR), Baguio City ranked 12th with 37 cases per day and a 10.2 percent hospital occupancy on October 23.

The Octa team averaged daily new cases from October 18 to 24 based on Department of Health case reports. The daily attack rate per 1,000 is based on the two-week period from October 11 to 24.

“As the national government continues to expand economic activity all over the country, we urge the national government to further improve and to make accessible the criteria (or a circuit breaker) that it will use to return the NCR and other LGUs to more restrictive quarantine levels to contain a future surge in Covid-19 cases. Many countries in Europe and in North America are experiencing a second or third wave of the pandemic now, and they are struggling because their governments were not prepared to limit public mobility as new cases of Covid-19 surged,” the team recommended.

An average of 318 RT-PCR tests are done in a day in the city with 15,107 individuals completing 14-day quarantine requirements and 18,667 done with the isolation.

The team also said that given the state of Covid-19 in the NCR and other cities and municipalities around the country, the LGUs, especially in the high-risk areas identified, must further intensify their efforts at testing, tracing, and isolation to reverse the increase of transmissions at the community level.

“Moreover, in identified high-risk areas, the implementation of more aggressive and effective localized lockdowns with stricter border controls is urgently needed to suppress further viral transmissions. To this end, we reiterate the need for the national and the local governments to strictly monitor and enforce compliance with minimum health standards such as physical distancing, the wearing of face mask and face shields and proper hygiene to reverse the increase in transmissions at the community level,” Octa said.

The Octa team said that in the analysis of hotspots, they used as basis the attack rate per 1,000 for the most current two-week period.