‘Rico was a game-changer’ 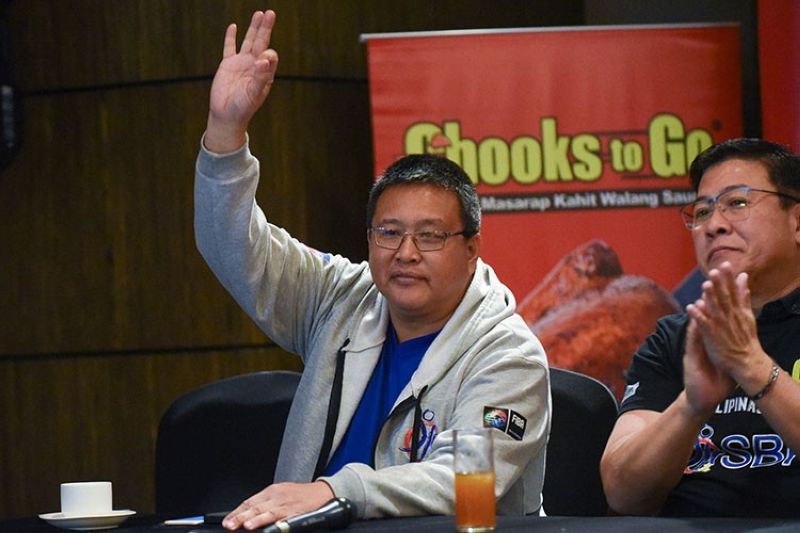 Coaches, players and colleagues alike paid tribute to the late Enrico Navarro, a man credited with helping lift Cebu sports to where it is right now. (Chooks-to-Go photo)

TO MANY, he was the indomitable presence on the sidelines of basketball tournaments catered for players at the grassroots level. Ubiquitous with a warm smile, a kind word or a reassuring tap on the shoulder for anyone who needed it — athletes, coaches, players, officials and parents alike.

To others, he was the friendly face seen on web shows that featured prominent athletes and was geared to inspire young players to aspire to reach new heights.

To some, he was a father figure on Ateneo de Cebu’s campus, tasked with guiding student-athletes to achieve excellence, both on and off their respective sports fields.

To Cebu’s sports community, he was a larger-than-life personality, whose effervescent character and boundless energy helped move the sports landscape forward in ways that it never has and probably never will again.

And while Enrico Navarro was a man of many talents, it was his heart that will forever be missed by friends, family, athletes, coaches, sportswriters and everyone whose lives were touched by the 53-year old sportsman.

While Cebu sports’ personalities mourned his sudden and tragic passing on Tuesday afternoon, they also celebrated his memory and the legacy he left behind.

“He wasn’t just a sports fan, he wasn’t just a sports writer but he was a visionary for Cebu grassroots basketball,” said Talisay City mayor, Gerald Anthony “Samsam” Gullas. “Without the basketball leagues he organized, as far as UV is concerned, there wouldn’t be a Paul Desiderio, there wouldn’t be a Leonard Santillan, or a Orlan Wamar, or a Jun Manzo and so much more.”

“So many kids have garnered high school and college degrees because of his vision of the importance of grassroots basketball,” added Gullas of the man who founded the Cebu Youth Basketball League and organized the BEST Center program here in Cebu.

“So many people touched. So many players lives changed. So many families helped. Cebu sports is mourning your loss. I honestly don’t know who can fill the void you left for Cebu sports,” Gullas continued.

“Rico was a game changer. He introduced innovations to the Ateneo Sports program, which made it a powerhouse school in both local and national sports. He was a believer in the concept of skills and sciences make a good partner to produce champions,” shared Dejaño.

Cebu City councilor, Raul “Yayoy” Alcoseba, disclosed that he was going to make a resolution expressing sympathy and condolences to the bereaved family of Navarro during their Cebu City council session.

“Nakakalungkot talaga. I admire Rico for his genuine passion sa development ng youth basketball and his sincerity as a friend,” said Reyes.

“I’m still in shock and emotional about sir Rico’s passing. I will always remember him as humble and jolly, and he always had this gentle approach,” said Abuyabor, who shared a seat at the table with Navarro on the Samahang Basketbol ng Pilipinas’ roster of regional directors.

“We had a lot of plans for the Visayas grassroots program after the pandemic. Nag-usap pa lang kami last Monday on how we can advance SBP’s campaign on regions 6, 7 and 8,” added Abuyabor.

“I could only describe Rico as peerless in sports, broadcasting, and to us in the world of Cebu basketball and other sports, he was both a gift and a giver,” said Sacdalan.

The “Cebuano Hotshot” Dondon Hontiveros said Navarro helped give young athletes opportunities to go to the next level.

“(He was) a bridge for the longest time. He created opportunities while having those kids who dream big understand what it took to get to the other side,” said Hontiveros.

His colleagues at Ateneo de Cebu said that Navarro’s warmth and kindness will never be forgotten.

“Sir Rico was a Christian gentleman. He radiated the love, joy and goodness of our Most Sacred Heart of Jesus. Our school will forever be grateful to him,” said Ateneo de Cebu president, Fr. Manuel A. Uy, S.J.

“Sir Rico is not only my superior but he was also my friend that I could talk to anything about sports. He was one of the most talented persons that I have met,” said Ateneo de Cebu Magis Eagles head coach Rommel Rasmo.

“Tito Rico was one of the kindest people I had ever known. He encouraged me, gave me advice and he is what I believe to be the secret to Ateneo de Cebu’s overall success in sports. I will miss him, we will all miss him,” said Velasco.

“He was incredibly generous to all the sports and not only in Ateneo de Cebu pero tibuok Cebu sports gyud. He was very supportive and proud especially sa mga athletes from Ateneo de Cebu na nag UP kay he’s from UP sad,” Jaboneta shared.