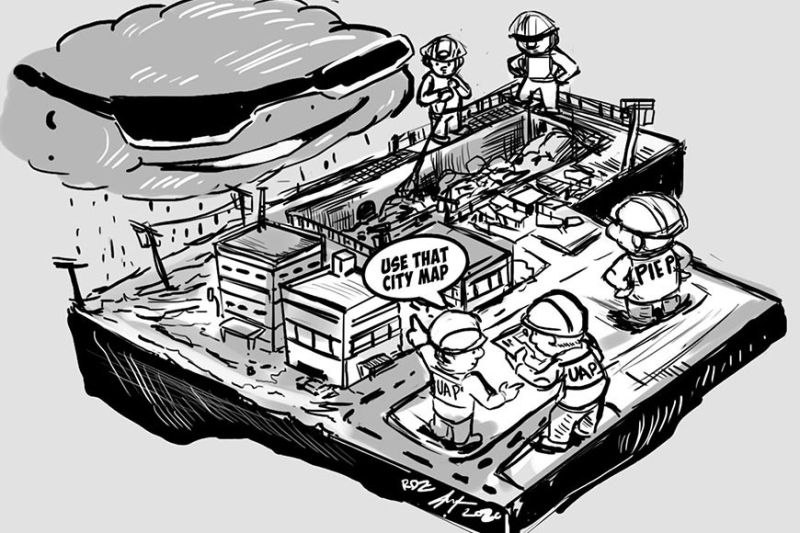 AROUND the time the Cebu City Government had formed an ad hoc committee to address the problem of waterways obstruction in the city, the Philippine Institute of Environmental Planners (PIEP) Cebu Chapter and the United Architects of the Philippines (UAP) Datu Lapu-Lapu Chapter had released a joint statement suggesting a number of prescriptions on Metropolitan Cebu’s flood problem.

Following the flash flood affecting even the supposedly high grounds in Cebu City, which killed three people on Oct. 13, 2020, the groups saw another round of “hand-wringing” among local officials, a response they say that is “woefully impotent” in the face of a burgeoning flood crisis.

The city’s drainage arteries are at once constricted by time and neglect and choked by the burgeoning volume of rubbish the city dumps into them. The groups said the metro’s waterways are “overwhelmed by the combined impacts of greatly increased rainfall volumes, diminished absorptive capacity of the ground due to paving, greater concentration of run-off, and the alarming encroachments into the major waterways...”

The groups have emphasized encroachments into the supposed easement areas “compounds the problem exponentially.”

Flooding is not a problem unto itself. While there are the more apparent and immediate effects of lives lost and properties damaged, flooding also diminishes land values, cuts down productivity, endangers public health and tarnishes a metro’s public image.

The groups suggest “easier” solutions as initial step in addressing the root causes of the cities’ flooding. It has enumerated its “short-tem mitigating measures.”

Government, the statement said, must review existing studies and surveys on the metro’s waterways. It can tap the services of experts in Lidar geographic survey technologies to establish a database, most especially on assessing properly easement areas and setbacks.

The group also prescribes the “City Map,” a legal document that defines the city’s waterways, roads, bridges and infrastructure. More than just an easy planning tool, the city map will inform any future policy on easements and ensure their protection.

“The three meter easements should be pursued relentlessly, initially at free areas and consequently on existing structures,” the statement read.

Here, apparently, is where the prescription hits a snag. Just how much of the easement areas are occupied by informal settlers and large commercial edifices? What would a “clearing operation,” which the groups suggest, entail?

In our Oct. 29 editorial, we have compared the whole task of solving the city’s flood problem to that of the pick-up sticks game where players try to pull off a stick from the loose stack without disturbing the bundle.

In looking at the city’s flood problem, the task is to understand the entire tangle of problems because it isn’t just as simple as eliminating the waterway obstructions. Flooding is but a manifest compound of a whole spectrum of urban problems—illegal settlers, solid waste management, sloppy planning and engineering, red tape, politics, corruption, etc.

The causes are so eclectic that it seems no one in the city can be spared of this guilt. Then, perhaps, it takes a village as well to solve the problem. The local government units in Metro Cebu must not work on piecemeal solutions, they must come up with a stakeholders-driven body to focus on the problem, a committee of sorts that works in the long haul and beyond shifting leaderships in cities.