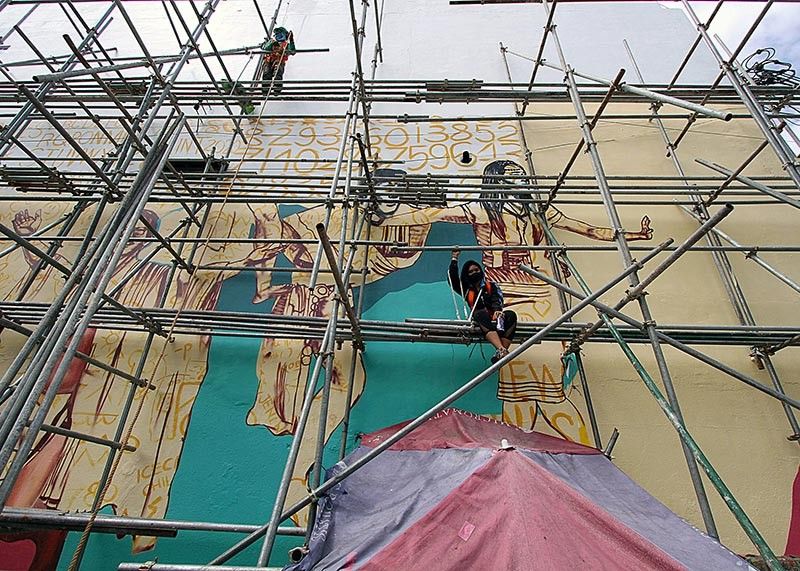 HILA-BANA. Venazir Martinez works on her street "Hila-Bana," an NCCA funded public art piece that will be unveiled next month. (Jean Nicole Cortes)

AN ATTEMPT to protect art in public places is being pushed in the Baguio City Council.

The City Council on Monday, October 26, approved a resolution penned by Councilor Mylen Yaranon, urging various barangay officials and the Baguio City Police Office (BCPO) to be vigilant in deterring all acts of vandalism in public places and places that showcase works of art.

Yaranon said even works of art are not safe from acts of vandalism and serve no purpose other than to uglify public places and to damage property.

The resolution also directed barangay officials and the police to monitor and strictly enforce our existing laws on vandalism in order to curb defacement of public places and to discourage intentional damage of artwork.

"Last week, a wall mural by local artist Venazir Martinez near Victory Bus Station PNR was vandalized. The mural is funded by the National Commission for Culture and the Arts (NCCA), although the case was settled amicably and the artist will not file charges, steps must be taken to deter similar acts from happening in the future. Taking into consideration that Baguio is a creative city as declared by Unesco, acts aimed at protecting the works of our creatives who have invested a huge amount of time, talent, and effort into these works of art that help beautify the city must be undertaken," Yaranon's resolution stated.

The councilor and heritage advocate said public buildings and facilities are the usual prey of vandals and preventing acts of vandalism in public places and in places that showcase works of art, "not only do we maintain the cleanliness and orderliness of a place but we also show appreciation to the work and effort of our local artists."

"This defacement and destruction of properties say a lot about the lack of public discipline. Consequently, the Local Government of Baguio spends a significant amount of taxpayers' money for the repair and restoration of these structures, instead of earmarking the same for more productive endeavors," she said the in the approved resolution.

Yaranon stressed "vandalism is the willful or malicious destruction or defacement of public or private property. It includes behaviors such as breaking windows, slashing tires and destroying a computer system through the use of a computer virus. It involves criminal damages to people's property without the permission of the owner. It can be also in the form of graffiti in a non-authorized or government infrastructures and properties. Vandalism is a crime; is one of the most common offended crimes in the Philippines."

The legislator cited Section 16 of the Local Government Code provides that "every local government unit shall exercise the powers expressly granted, those necessarily implied therefrom, as well as powers necessary, appropriate, or incidental for its efficient and effective governance, and those which are essential to the promotion of the general welfare. Within their respective territorial jurisdictions, local government units shall ensure and support, among other things, the preservation and enrichment of culture, promote health and safety, enhance the right of the people to a balanced ecology, encourage and support the development of appropriate and self-reliant scientific and technological capabilities, improve public morals, enhance economic prosperity and social justice, promote full employment among their residents, maintain peace and order, and preserve the comfort and convenience of their inhabitants."