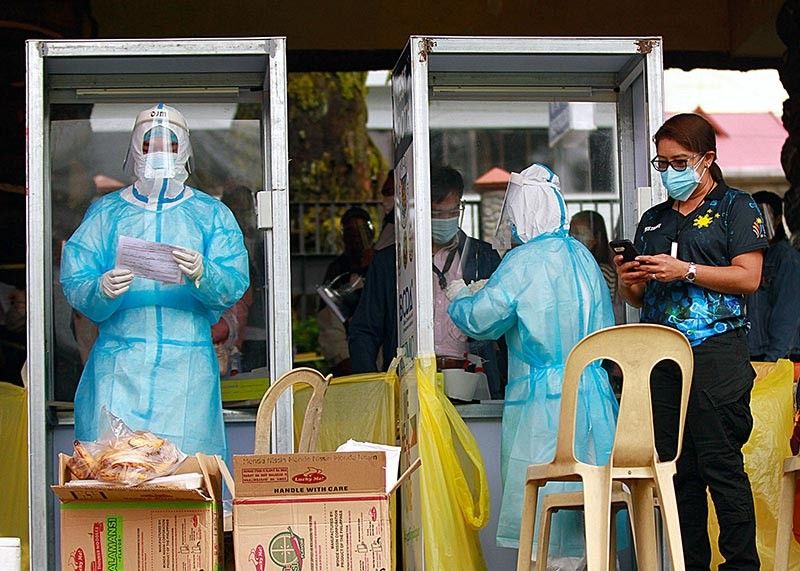 EXPANDED TESTING. Bases Conversion and Development Authority conducts expanded testing for coronavirus disease (Covid-19) from October 26 to 28 that will benefit some 3,000 residents. The expanded testing schedule in Baguio City is the third time from BCDA. (Jean Nicole Cortes)

FOLLOWING the spike in Covid-19 cases in Benguet, the province is set to conduct more testing in different towns.

The mass testing, spearheaded by the Bases Conversion and Development Authority (BCDA), will be done in five towns after Baguio City Mayor Benjamin Magalong decided to distribute 1,100 out of the 3,000 tests earlier allotted to the Summer Capital.

The capital town of La Trinidad will get bulk of the test with 400, while Tuba and Kapangan get 200, as Sablan and Tublay were allotted 100 apiece.

La Trinidad will administer the testing Thursday, October 29, according to Mayor Romeo Salda.

Salda added that stakeholders from the Benguet Agri-Pinoy Trading Center, strawberry farmers, vegetable truck drivers, frontliners from the Philippine National Police and other workers of the municipality will be tested.

Only one tested positive for the virus.

Salda said the town earlier conducted 4,159 tests and in August, received 1,800 swab test kits from the Department of Health.

In Itogon, 1,500 individuals are set for the RT-PCR testing in the BCDA-led mass testing.

Dr. Oliver Guadana, municipal health officer, said the activity will be conducted on October 30. The individuals to be tested include employees of Benguet Corporation.

Since the start of community quarantine in March, he said a total of 3,500 tests for Covid-19 from the Department of Health and Office of Benguet congressman were conducted.

From the expanded testing since May, he added they have tested Itogon barangay officials, Department of Education personnel, and pregnant women.

Since last week of September, they concentrated tests for the close contacts of Covid-19 confirmed cases in the town.

In Kapangan, Mayor Manny Fermin said the 200 Covid-19 tests were allocated for contact tracers, nurses, local government employees and tricycle drivers to ensure safety of workers in the frontlines.

The testing was conducted on Wednesday, October 28, at the municipal gym.

After a confirmed patient involving a nurse who completed 14-day quarantine in Kapangan, there are zero active cases in the town, the mayor said.

Fermin added that once a patient from 200 swab tests will result positive and if the Benguet General Hospital in La Trinidad accommodating confirmed Covid-19 patients are full, the town prepared its quarantine facility.

The chief executives in the province thanked the City Government of Baguio for its support to the different towns of Benguet.