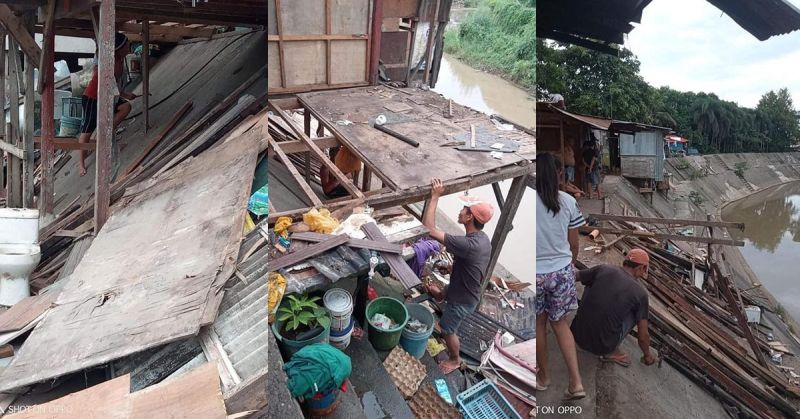 FOLLOWING the voluntary demolition of structures near Talomo river, a safety and security official in Davao City is appealing to families living along the riverbanks to also do the same.

Davao City Public Safety and Security Command Center (PSSCC) head Angel Sumagaysay said during a radio interview that his appeal was based on Mayor Sara Z. Duterte-Carpio's order of ensuring that there should be no residential structures near riverbanks.

Sumagaysay said the City Government has been firmly calling on families and individuals living along rivers, levees or dikes, and other danger zones to voluntarily dismantle their homes and vacate these areas for their safety, especially during intermittent weather.

The PSSCC official said residents in these areas are only putting themselves at risk since they would be the first to be directly affected once the water level rises.

He added that structures should not be built along dikes as these were built to prevent flooding coming from the sea.

On Sunday, October 25, a total of 26 informal settlers in Purok 34, Taal in Bangkal heeded the call of the Davao City Government to voluntarily demolish their structures built on the Talomo River embankment, mostly extensions of their houses.

Some of the demolished structures were living rooms, kitchens and toilets.

He added these structures had also contributed to the pollution of the rivers.

"It was a peaceful activity and there was no coercion or whatsoever. We just had a talk with the barangay captains and purok leaders and then the day after, they commenced with the self-demolition," he said in a radio interview via 87.5 FM Davao City Disaster Radio.

Affected residents were given food assistance by the City Social Welfare and Development Office. The agency is currently conducting an initial listing of the settlers who will be receiving assistance from the local government.

Sumagaysay said the local government expressed its gratitude for the willingness of the residents to cooperate with the authorities on a matter that involves the safety of their families and the entire community.

He also called the attention of other barangay officials whose residents are living near riverbanks to encourage them to self-demolish and transfer to other safe areas.

Meanwhile, the city created the Davao River Patrol and Coastal Road Monitoring Team, which are tasked to monitor and clear riverbanks and coastal roads from residential structures.

Sumagaysay said the City is now also planning to designate security posts in the city's coastal roads to ensure no illegal residential structures will be mounted nearby.