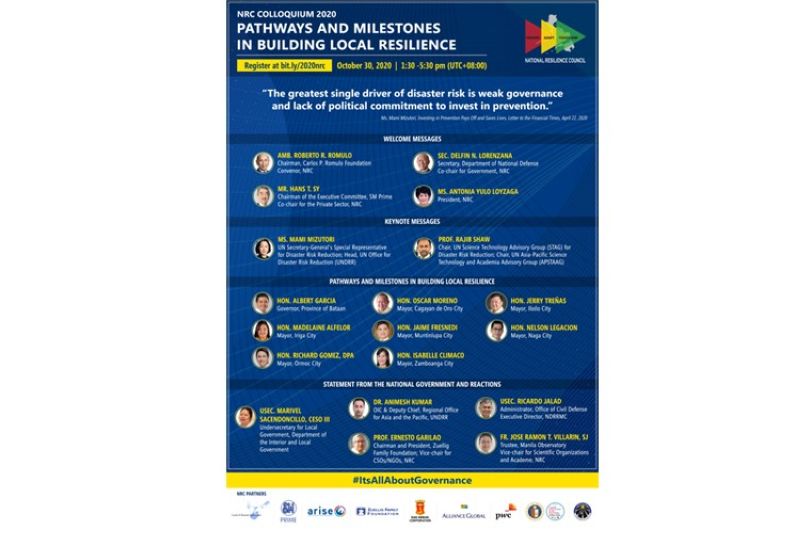 Mayor Jerry Treñas will discuss developments the metropolis is taking on its way toward resilience.

Iloilo is among the pilot cities along with Cagayan de Oro, Iriga, Muntinlupa, Naga, Ormoc, and Zamboanga and Bataan province to highlight their initiatives.

"It will be an opportunity for local chief executives and their respective local Resilience Councils to report on their accomplishments and milestones relative to resilience-building and share a narrative of their personal leadership journeys," NRC stated.

The event marks the transition of NRC's local government partners from the program's Year 1 "Prepare" to Year 2 "Adapt" phases.

NRC engages local government units in the Philippines in making climate and disaster resilience their priority.

The works focused on building dynamic multi-stakeholder collaboration through the following: development of science and technology-based solutions that reduce disaster risk, enhancing internal capacities of local governments to lead through evidence-informed risk governance, and strengthening and sustaining high-level collaboration between government and industry.

One of the ways by which these are achieved is through NRC's flagship "Resilient Local Government Units Program," which aims to bridge critical gaps between science, policy, and practice.

This three-year two-track "Leadership and Governance and Science and Technology" program, which was cited as one of Sendai Framework Voluntary Commitments' good practices, highlights the "Prepare, Adapt, and Transform" phases of resilience-building through trans-disciplinary knowledge development and co-ownership and co-creation of contextualized solutions to resilience challenges.