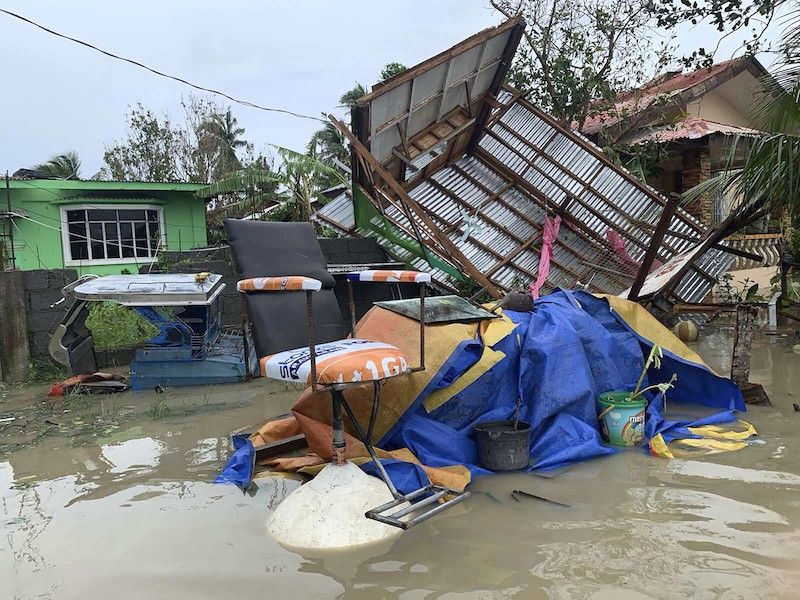 MINDORO. This is what remained of a barbershop in Pola town on the island of Mindoro, where Typhoon Quinta made its fifth landfall on October 26, 2020. (AP)

THE fatalities from Typhoon Quinta (Molave) has increased to 16, the National Disaster Risk Reduction and Management Council (NDRRMC) reported on Thursday, October 29, 2020.

In a report, the NDRRMC said two of the fatalities were from Calabarzon (Cavite, Laguna, Batangas, Rizal and Quezon), seven from Mimaropa (Mindoro, Marinduque, Romblon and Palawan), five from Bicol and two from Central Visayas.

There were also 22 people who were injured while four others remained missing as of Thursday.

A total of 57,742 families or 242,220 persons in 1,008 barangays in Central Luzon, Calabarzon, Mimaropa, Western Visayas and Eastern Visayas were affected by flooding, storm surge and landslides.

Of the total, 16,830 families or 65,579 individuals were served inside evacuation centers while the others opted to stay with their relatives.

The NDRRMC said the Department of Social Welfare and Development in coordination with the local government units and non-government organizations have provided a total of P1.23 million worth of assistance to the affected families.

There were 91 typhoon-related incidents, including 63 flooding incidents, 22 landslides or soil eruption, five sea mishaps and one storm surge.