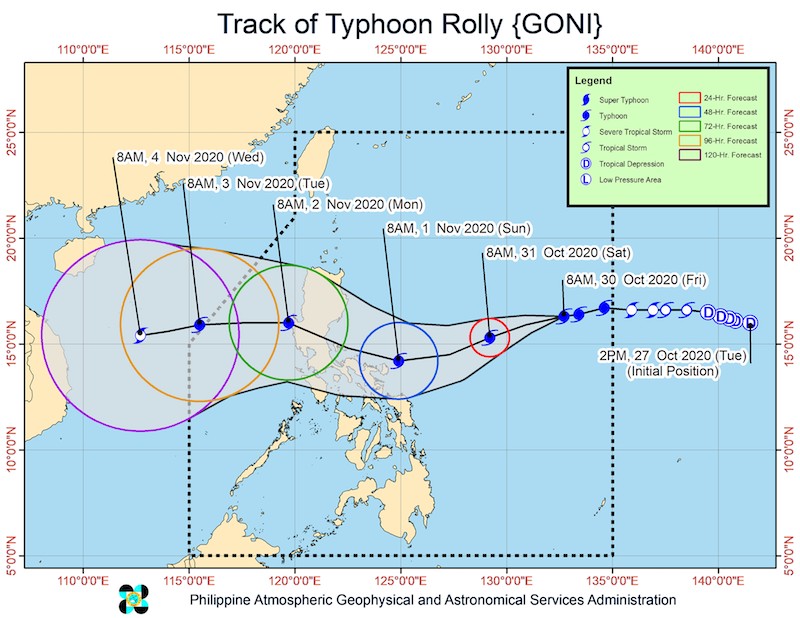 It is forecast to continuously intensify and hit land with winds of 175 to 185 kilometers per hour.

Afterwards, the typhoon will turn west-northwestward as it moves over the sea off the coast of Bicol Region towards the eastern coast of Aurora-Quezon area.

The trough of the typhoon is expected to bring light to moderate with at times heavy rains Friday over Bicol Region, Visayas, Caraga, Northern Mindanao, and Zamboanga Peninsula.

It will likely bring heavy to intense rains over Northern and Central Luzon and Bicol.

Pagasa said it will likely place some areas in Bicol under Tropical Cyclone Wind Signal no. 1 Friday afternoon, in anticipation of the typhoon’s strong breeze to near-gale conditions.

A gale warning has been issued over the seas off northern Luzon and the eastern seaboards of Central and southern Luzon. Sea travel is risky, especially for those with small seacraft.

Another storm, Tropical Storm Atsani is also expected to enter the Philippine area of responsibility (PAR) on Sunday or Monday.

Pagasa said, however, that this is less likely to bring severe weather over any locality of the country over the next three days.

Once inside PAR, it will be given the local name “Siony.”

It has maximum sustained winds of 65 km/h near the center and gustiness of up to 80 km/h. It is moving west-northwestward at 35 km/h. (MVI/SunStar Philippines)