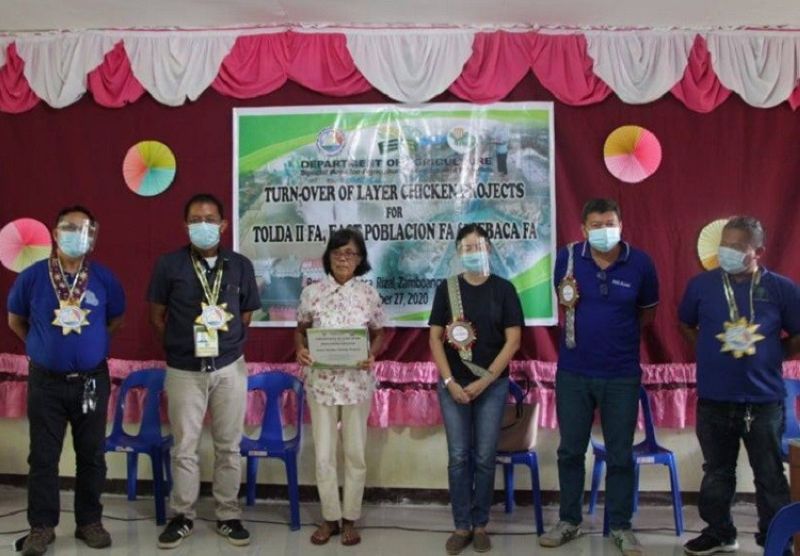 ZAMBOANGA. The Department of Agriculture-Special Area for Agricultural Development on Wednesday, October 28, turned over Layer Chicken Egg Production projects to three farmers’ associations in Rizal, Zamboanga del Norte. A photo handout shows a representative of one of the three beneficiary-groups joining the DA official in a photo session. (SunStar Zamboanga)

THE Department of Agriculture-Special Area for Agricultural Development (Saad) program has turned over three Layer Chicken Egg Production projects in the municipality of Rizal of Zamboanga del Norte.

The beneficiary-associations received one poultry project each, bringing the total project costs to ₱4.2 million in Saad livelihood interventions given to them starting 2017 until this year, according to the DA-Zamboanga Peninsula.

Rizal Municipal Mayor Fiona Marie Manigsaca expressed gratitude to DA-Saad, saying, “We really appreciate this program because these projects have been properly implemented and monitored.”

“Saad did not just stop at giving the chickens to the farmers, but they continue to guide and mentor our farmer-beneficiaries to make sure the project will not go to waste. Aside from alleviating our farmer’s livelihood, this project also supported our local consumers by providing them the opportunity to have a source of food supply, where to buy fresh eggs,” Manigsaca said.

“We are really glad that we received this livelihood. We are also proud that during the Covid-19 pandemic, we were able to donate 84 trays of eggs to the community. Giving back to the community is part of our success that we would like to share with others,” Mongcupa said.

Reynaldo Campomanes, DA-Zamboanga Peninsula operations chief, said the Saad projects are uniquely designed to better cater to the needs of the farmer-beneficiaries.

“We do not only give a jump-start to them but instead, we provide a complete package like the layer chickens, chicken feeds and the housing facility. Now, the secret to success would be the responsibility and commitment of our farmers,” Campomanes said. (SunStar Zamboanga)