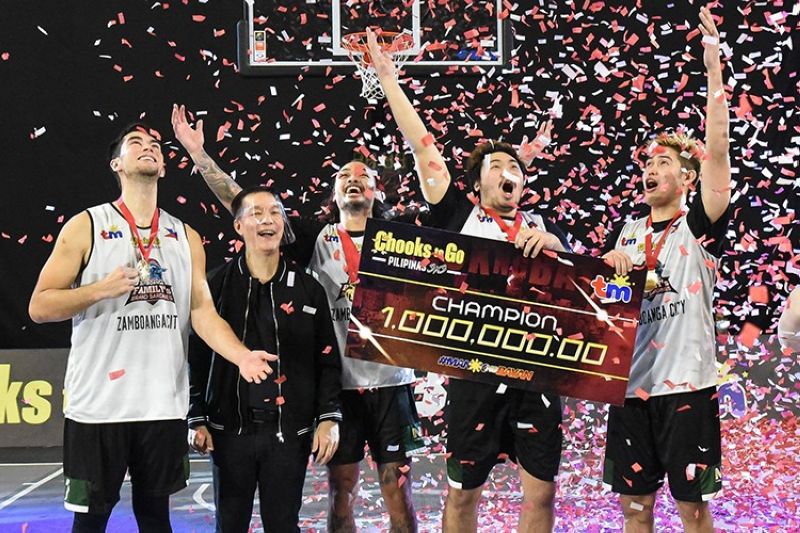 The Family’s Brand Sardines-Zamboanga City captured the championship in the Grand Finals of the 2020 Chooks-to-Go Pilipinas 3x3 President's Cup powered by TM as Joshua Munzon came up clutch, hitting a two-pointer that sealed a 22-19 victory over Nueva Ecija in the finals on Friday at the INSPIRE Sports Academy in Laguna.

Nueva Ecija fought tooth-and-nail with the mighty Zamboanga City, which is composed of 3x3 national team members, and was down by just one, 19-20, in the final match dubbed as the “Million Peso Game.”

However, Munzon calmly rose up over Nueva Ecija’s Jai Reyes and sank a deuce that put an end to the match, give Zamboanga City the win, the title and the whopping P1 million cash prize.

"From the start, we had a game plan and we stuck to it," Munzon said while wearing the gold medal in the post-game press conference. "Whether we won or lost, we just continued to do the same things over and over and over. Our will was tested, but the results speak for itself."

The top player in the country and Alvin Pasaol each scored seven points while Cebuano Leonard “Santi” Santillan and Troy Rike had four points apiece.

With that, Zamboanga City topped four out of the five legs in the two-week competition.

In all, they took home P1.35M as well as much valuable experience heading into the FIBA 3x3 Olympic Qualifying Tournament.

The win though, was not handed to Zamboanga City on a silver platter. They also went through some anxious moments after Pasaol missed two free-throws, either one of which would have given them the victory.

Nueva Ecija even had a shot at grabbing the championship but Gab Banal's long-range try fell short.

Zamboanga City hauled in the rebound and not long after, Munzon hit the shot that etched their names into the history books.

"Those are the shots I've been taking the tournament," he said. "It felt good coming out of my hands. I was confident about that shot."

The runner-up finish rewarded Nueva Ecija with P300,000. Rounding out the podium was another upstart in Pasig-Sta. Lucia Realtors who received P100,000. (JNP)