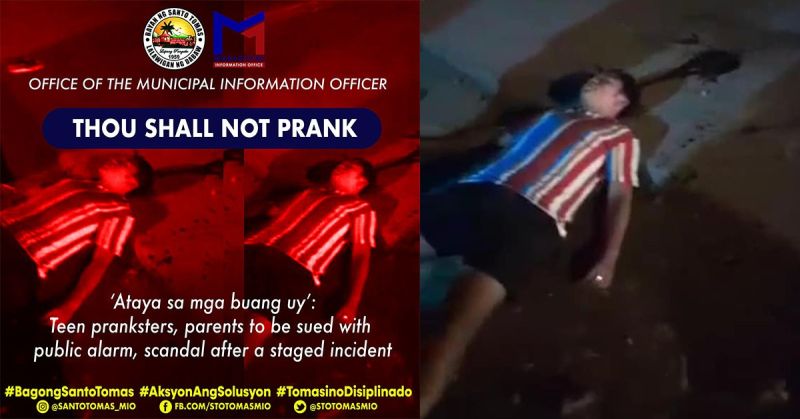 THE Municipal Government of Sto. Tomas in Davao del Norte will be conducting a manhunt operation against a group of teens who staged a prank that caused public alarm and scandal.

A 30-second video, uploaded and made rounds on social media at dawn on Friday, October 30, shows a man lying down on the street and apparently was soaked in his own blood.

According to the video, the man sustained stab wounds and his blood spilled all over the road and was a result of an alleged gangsterism incident.

Municipal Information Officer Mart Sambalud said in a press statement that the video caught the attention of the Sto. Tomas Inter-agency Task Force (IATF). It has also been forwarded to the Incident Command Security System, who, in turn, alerted the medical personnel at the Municipal Health Center.

They immediately responded to what appeared to be a gangsterism incident on Feeder Road 1, Barangay Tibal-og in Sto. Tomas.

However, he said some netizens reported that the incident was choreographed by teen pranksters in a bid to gain publicity and traction on social media.

"We condemn this distasteful, cheap, and injurious prank that caused panic and disturbance. These teenagers should be at the confines of their homes during the province-wide curfew hours," Sambalud said.

He added that such a prank during this time of Covid-19 pandemic is uncalled for.

The information officer said the Santo Tomas IATF already recommended to the Santo Tomas Philippine National Police to file charges against the teen pranksters, who are currently being identified as the persons behind the video, and locate their whereabouts.

He said the pranksters will be facing charges for violating Article 155 of the Revised Penal Code, which bans actions inappropriately causing alarm and scandal.

"If the pranksters are minors, Section 5 of the Municipal Ordinance 2020-017 stating that the criminal liability for the penalty of the fine shall be imposed upon the parents, grandparents, guardians, or any person who has custody of the minor offenders including other penalties for violating the Covid-19 ordinance," Sambalud said.

Meanwhile, he is urging the public's cooperation in giving the Municipal Government information such as the names of the teenagers who uploaded the viral video.

As of Friday, the video can no longer be traced online. But the Municipal Government was able to post some of the screenshots, attached with their official statement on the incident.