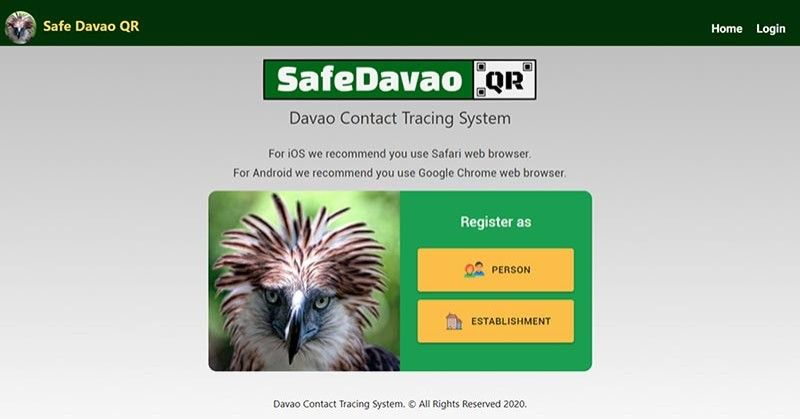 THE City Government of Davao will start implementing the mandatory use of the “Safe Davao QR” System (DQR) among residents and non-city residents beginning November 7.

The Safe Davao QR is a platform created by the local government to help expedite contact tracing and enforce the prohibition on non-essential travel.

All residents and non-residents of Davao City are required to secure their unique and permanent DQR to travel around the city. Those who plan to enter Davao City will also need to secure a DQR.

The city government, through a public advisory posted on their official Facebook page, announced the start of the DQR registration beginning at 5 p.m. Saturday, October 31.

The local government officially gave the link where the public can secure their own QR code, https://safedavaoqr.davaoct.com.

"The DQR link for INDIVIDUALS will be open to all who need to move around Davao City to work, do business, access goods and essential services," the City Government said in an advisory.

Employers should assist all their workers who do not know how to go online or do not own a smartphone.

The registration of DQR links for establishments was officially opened at 10 a.m. on Sunday, November 1.

Establishment owners will register in the same link for individuals.

City government employees who participated in the pilot testing of the DQR last week will need to secure a new DQR.

For further queries and additional information on the DQR, the City Government reminded the public to refer their concerns to their official Facebook pages: City Government of Davao and SafeDavao QR.

The City Government also reminded the public not to post or share their personal QR code to avoid identity theft.

The public is also warned not to access any other link except the one the City Government provided.

DQR is free of charge and will not require any credit card nor bank details, the local government said.

Davao City Mayor Sara Duterte-Carpio said the DQR is in response to the continuing rising of Covid-19 cases in the city, attributing to the lessening of some quarantine restrictions since the city shifted to modified general community quarantine.

Duterte-Carpio added that the system is in replacement of the food and medicine pass as a means to regulate the movement of the public.