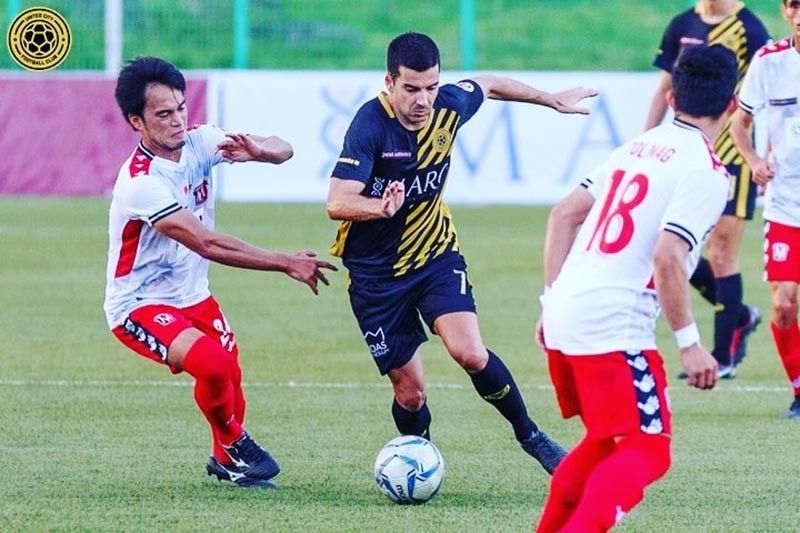 BACOLOD.Bienvenido Marañon (7) trying to beat Mendiola 1991 FC defenders during their face-off over the weekend. (UCFC Photo)

THE United City Football Club (UCFC) is looking for their third win on Tuesday, November 3 at 8 p.m., when they face Maharlika FC in the ongoing Philippines Football League at the PFF National Training Center in Carmona, Cavite.

UCFC earned their second straight victory over the weekend in a 6-nil demolition against Mendiola 1991 FC.

AFC Cup reigning topscorer Bienvenido Marañon fired a hat trick in the first half to give UCFC a very comfortable lead as Robert Lopez Mendy had a brace, while Mike Ott registered his second goal of the season.

“I’m happy for my goals but, even happier for the team winning [this game], and also on how we played the first half,” said Marañon following his hat-trick performance.

The UCFC striker also felt glad to get back and play in the league despite the pandemic and the storms.

“The Philippine Football Federation and PFL Commissioner Coco Torre did a great job to have this football. And, here we are, and all of us appreciate their hard work during these months,” Marañon stressed.

As one of the senior players of the team, he encouraged and helped the young players to adjust and perform at their level.

“They have to adjust to professional football, especially that our team is different compared to any club in the country and most of all in the Asean. We like to play with intensity and keep possession. To do it, they need to understand the game and work hard to keep themselves at our level,” he said.

“Little by little, I’m sure they can do it. I and the rest of the older players in the team are working on it, and soon we will have great results,” he added.

The win put UCFC on top of the table with back-to-back victories including 7 goals.