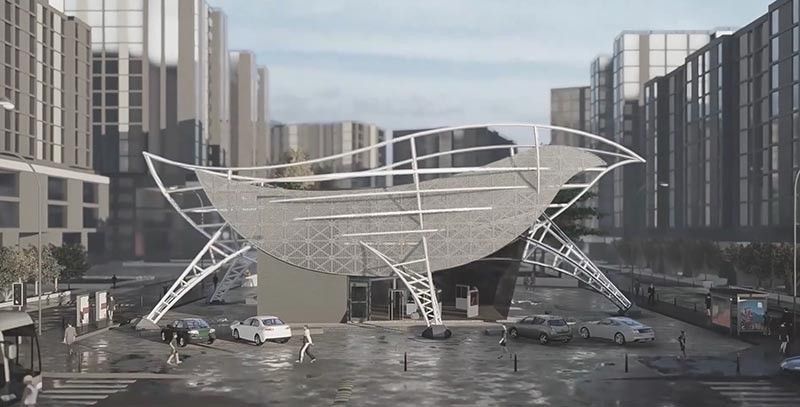 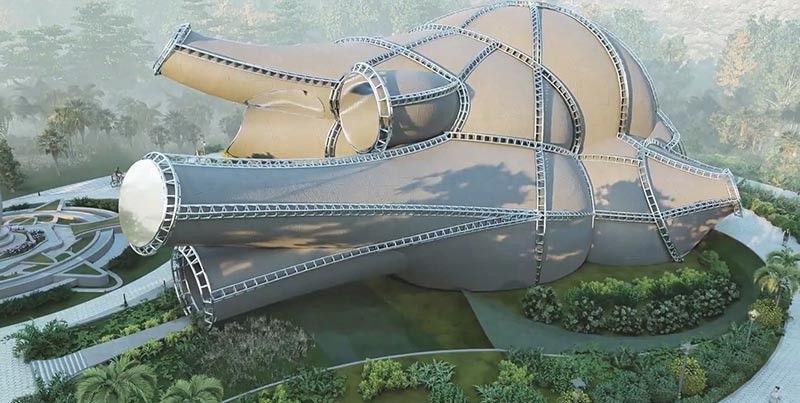 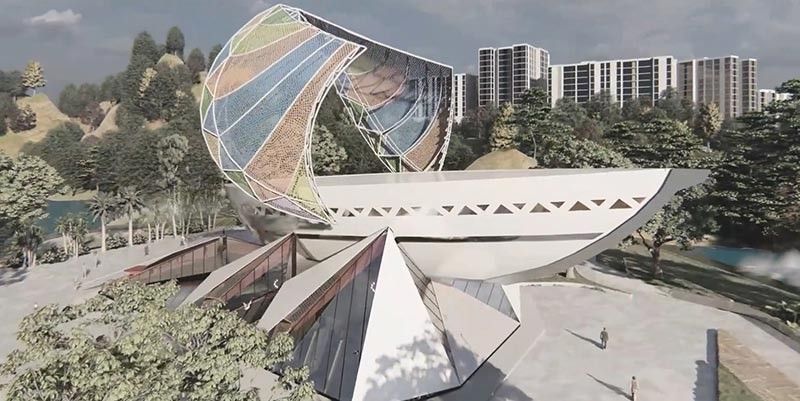 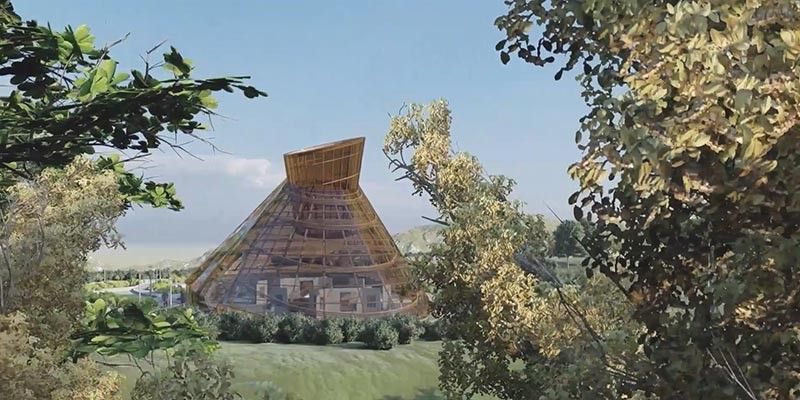 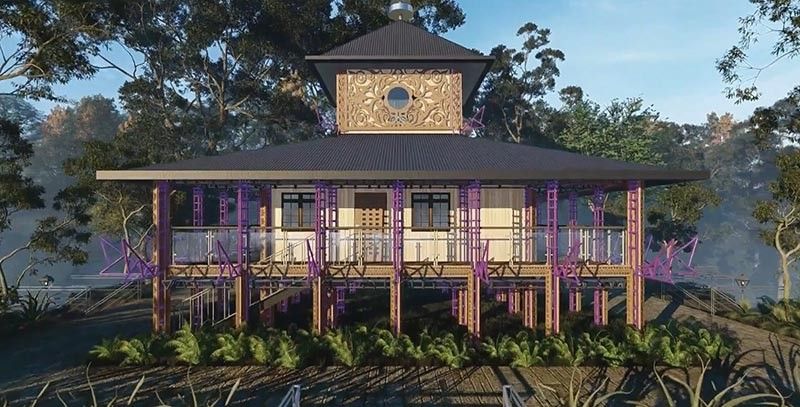 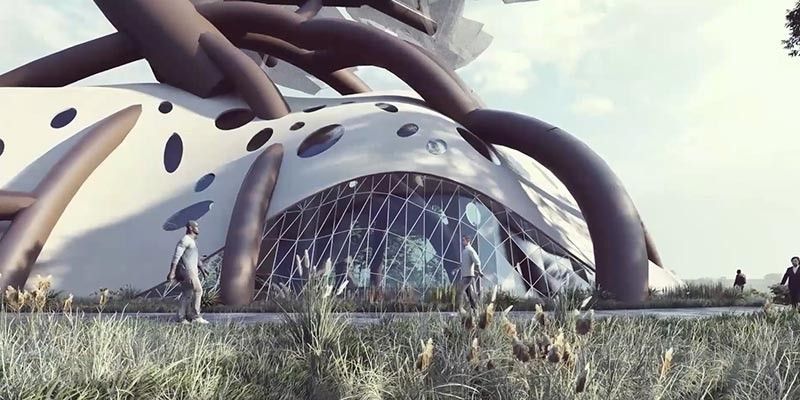 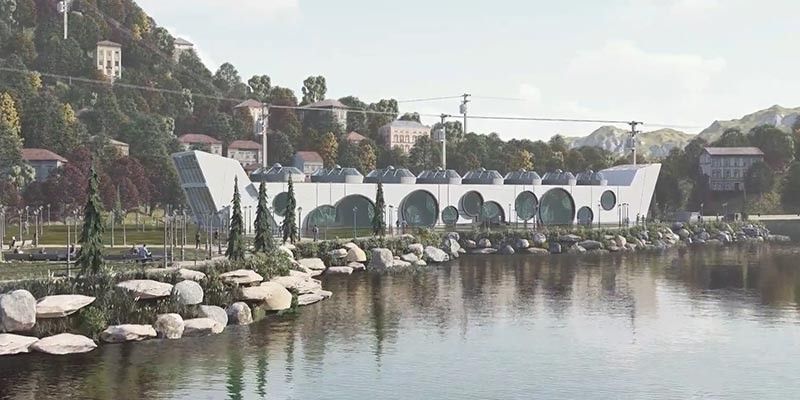 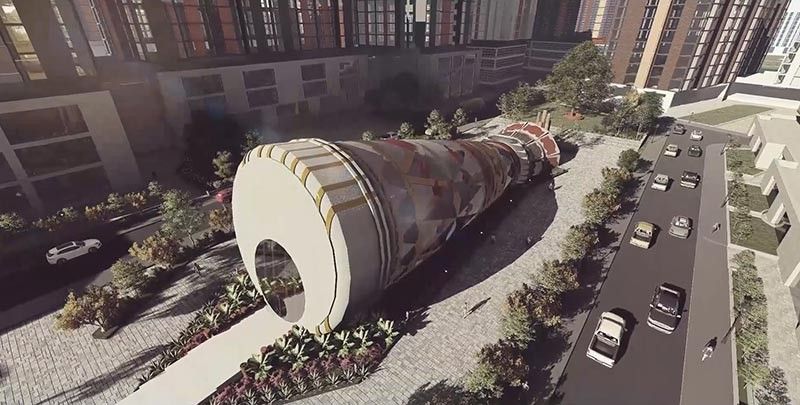 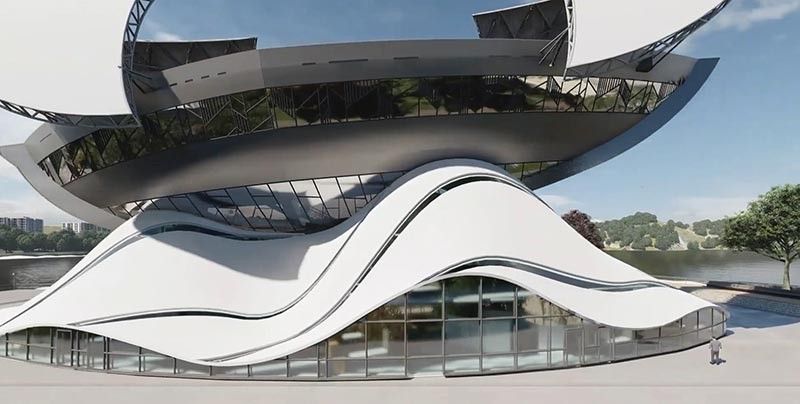 "THIRD Spaces," ten monumental virtual structures designed to house Mindanao Art 2020's hundreds of artworks, are themselves creative expressions. They make use of cyberspace to open up new possibilities for the appreciation of architecture.

The Third Spaces museums are designed to foreground how colonial, modern, globalized consumerism has rendered local imagery in Mindanao alien and unknown to Mindanawons themselves, the norm being the Westernized or Filipinized generic that pervades the urban landscape.

In the tradition of Monumentalism, these subaltern local images -- from emblematic items from cultural communities to unique natural scenes -- are re-imagined into structures so large they cannot be ignored.

Each structure is inspired by imagery unique to or with a long association with each locale, in many cases beyond even the knowledge of the local mainstream. They take the discourse on the subject -- and ultimately of the locale -- forward, stimulating communities to be writerly and struggle to find new ways of rooting themselves, both to the structure and to the locale where the structure is envisioned to be built. Each structure also charts the creative journey of the designer, and the ensemble is a celebration of how art is the process of the artist's imaginative and intellectual growth.

The series of structures is part of a developing movement to celebrate the genius of the local, and of building an ecology of locales stimulating one another into introspection.

The use of the virtual platform is also deliberate: the sheer absence of actual creative spaces in Mindanao is a deplorable fact that should have long been addressed, museums and other art spaces usually relegated to insignificant corners or poorly recycled buildings. That we are only seeing properly designed museums on cyberspace should make that painful truth all the more apparent. "Third Spaces" is also a challenge to designers, patrons, and local governments to begin designing and investing into building creative spaces in Mindanao.

1. Kaban Shaped like a giant box (with motifs reminiscent of the ornately designed Meranaw Baor), the Kaban has for many cultures been the container of valuable things, from expensive commodities to precious mementos. As people today continue to lose the ability to hold things dear, the significance of Kaban, and the tradition of keeping treasures, is increasingly fading , a trend that should be resisted. The design itself is precious to the designer, who first envisioned it in 2008 as a museum for artist Kublai Millan. It is being launched for the public to see for the first time in Mindanao Art, an event he and Millan worked together on.

2. Uyayi. Uyayi, Tagalog for lullaby, is envisioned as a structure reminiscent of both a dove and a boat. The design is intended to evoke peace, and the desire for peace in this island long disturbed by conflict. Within this space of peace, art can flourish and take sail to cross oceans. In that sense, too, the structure is meant to be reminiscent of a cradle, where imaginations can grow in peace.

The designer also sees it as a representation of a phase in his own creative journey. Originally entitled "Bangkapayapaan," the design was first conceived as an art installation piece, and meant as a response to the 2018 Zamboanga Siege. It was first installed in Davao's Abreeza Mall before being made into a public monument in General Santos City. "Uyayi" is the scaled up version of the concept, developed as possible design for another Artspace in Davao City.

3. Tapayan. Originally titled "The Heart Museum," Tapayan is the first in the suite of museums, which gives special attention to locale. It is specifically envisioned to stand in Bukidnon, the geographical heart of Mindanao, and is formed with the figure of seven jars, each representing Bukidnon's seven indigenous cultures. It is hoped that the beating Mindanao's creative heart begins in this geographical heart, and that, as older starter is added to a fresh brew, the growth of Mindanao's art will be inoculated into maturity by the province's -- and Mindanao's -- many beautiful traditions.

4. Vinta. Making use of the iconic symbol of Zamboanga as inspiration, "Vinta" is envisioned to stand in the city's equally famous boulevard, its colored glass sails sparkling in the Zamboanga sunset. Zamboanga City with its many Spanish era structures and relic Chavacano culture has a tendency to be stagnant. The eye-catching "Vinta" is intended to stir some life into that stagnation, taking the beautiful local's colorful culture forward.

5. Tambol. Another piece envisioned to be built in Bukidnon, "Tambol" is designed after a Talaandig percussion instrument. The drum is inverted to have the hide face downwards, both to remind people of the need to be rooted, and to keep that rootedness dynamic, vibrant, beating. The designer was inspired by a drum made by a Talaandig craftsman, but he could not afford the piece. Instead he drew inspiration from its image and the design is now to be made into an Art space and theatre center for the Talaandig people.

6. Lamin. The Lamin is a unique but fast disappearing feature in Meranaw architecture -- it is a room placed at the very top of the Torogan, and from outside looks like a turret with a large, round window ornately adorned with the Meranaw okir. The daughters of the datus or sultans who occupied the Torogan were kept cloistered in the Lamin, their elevated position both to keep them away from the mundane world and to showcase them for all to see. The decline of this architectural feature is the result of changing social realities, changes that the Meranaw hardly pay enough attention to. This virtual museum is intended to remind people of this now relic architectural feature, hoping it stimulates introspection. As a museum, it is also intended to show that same gesture of elevating and showcasing art. The design was originally envisioned as a weaving center in Marawi.

7. Bakaw. "Bakaw" explores an image rich in symbolic potential but hardly utilized in the arts -- the mangrove. Exposed rootedness is the most evident idea, the usually hidden roots revealed to form an image that arrests attention. This exposure has allowed an entire ecosystem to thrive: their rootedness has allowed mangroves to survive in harsh conditions, and their survival has benefited their areas, an approach which people would hopefully emulate. Mangroves once lined the banks of the Davao River and the shores of the gulf, and like the city's great hero Datu Bago, it served to protect the area, blocking houses from storm surges. But coloniality came, and like the memory of Datu Bago, the mangrove began disappearing. This rich narrative has inspired the designer in many other designs, including office tables and lamps.

8. Kulintang. A feature, which links Mindanao to the musical traditions of many Southeast Asian cultures, the Kulintang is a set of many individual instruments which play as one, the musician himself becoming part of the set. This traditional percussion set will resonate with many cultures in Mindanao, and using it as design inspiration will hopefully elicit more insights from communities about its significance. The design of the structure in particular has connections with Davao's Kalumon Performance Collective, one of whose performers shared with the designer his dream of a Kulintang-shaped building. If built, it will also be an expansion of the vision started by Kublai Milan in his Agong House.

9. Dabakan. The instrument, which inspired "Dabakan," is at once classic and cutting edge. Its form is a feat of timeless human genius, the instrument's scale and detail always making it imposing. Its loud, unmistakable sound resonates in primeval forests to proclaim humanity. The resonance of the Dabakan connected people across distances, the same way waves of technological advancement connect people today. It is hoped that the artworks exhibited in "Dabakan" will have the same unmistakable impact on the community as this percussion instrument.

10. Balangay. While the small boat has a rich history and diverse significance in the cultures of these islands, the "Balangay" is a poignant symbol of how Mindanao lost sight of its own histories because of contrived Filipino nationalism. Not content with robbing Butuan of its relic boats, the nation-state imagined from Manila even denied us the right to be who we are. In its eagerness to invent one civilization out of the archipelago, the Philippines imposed the boat as a metaphor for all pre-colonial settlements. In the process, it ignored the completely non-boat related genesis of many ancient settlements in Mindanao (in the case of terms like "ingod," - both "village" and "world" - so much fruitful discourse needlessly silenced). Worse, the imposition threatened to erase the other beautiful metaphors which Mindanao's cultures came to form around the boat: for the Obo Monuvu, the "ballangoy" is a gift, given by parents to their estranged children to encourage reconnection; while to the Ata it is the Skyboat of epics, descending from the heavens to take the hero and his chosen people to the realm of the gods. "Balangay" aims to reclaim all of that lost significance, and as it defies oppressive and deceptive Filipino homogenization, it celebrates the many beautiful ways of being Mindanawon.