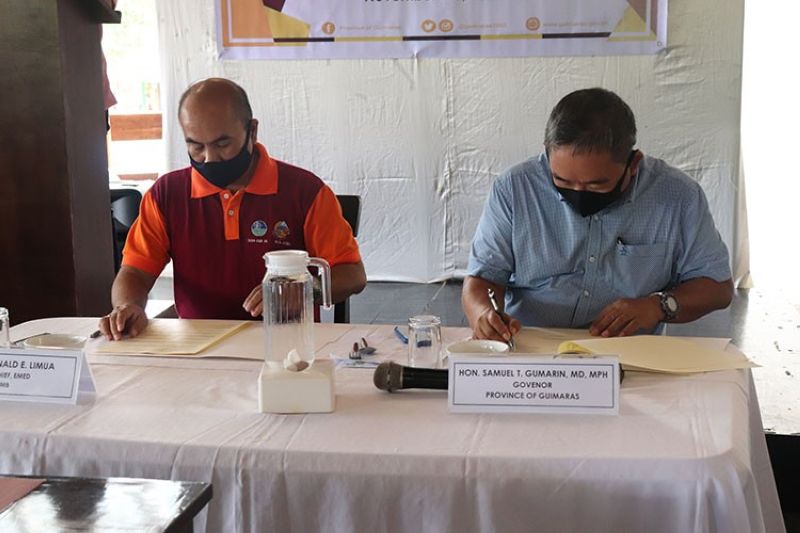 THE Province of Guimaras strengthened its initiative and raised awareness in maintaining the island's good air quality in partnership with the Department of Environment and Natural Resources Office (DENR)-Environmental Management Bureau (EMB) as it celebrates National Clean Air Month.

The event was highlighted by the signing of memorandum of agreement between the Provincial Government of Guimaras represented by Governor Samuel Gumarin and DENR-EMB-Western Visayas represented by Director Ramar Niel Pascua.

The deal forged a partnership between Guimaras and DENR-EMB-Western Visayas to collaborate their efforts in addressing environmental issues and concerns with special consideration on mobile source of pollution in the province.

Further, EMB shall lend equipment (opacimeter) to the Province of Guimaras and will provide technical assistance in both operation of the equipment and in the conduct of any related activities.

Gumarin encouraged the Guimarasnon to be responsible by helping the island of Guimaras in its battle against air pollution and to maintain the good air quality in the province.

Furthermore, as part of the MOA signed by Gumarin, the Province of Guimaras issued Executive Order 72, "An Order Creating the Guimaras Anti-Smoke Belching Unit (ASBU)," to adhere to Republic Act 8749, otherwise known as the "Philippine Clean Air Act of 1999," which is to protect and advance the right of the people to a balanced and healthful ecology in accord with the rhythm and harmony of nature.

The EO is composed of two major teams -- the enforcement team led by Ma Asuncion H. Trespeses, acting chief of LTO-Guimaras, responsible for the roadside inspection and apprehension of vehicles violating emission standards under the RA 8749 within the territorial jurisdiction of the province.

The information, education and campaign team was tasked to institute an information and education campaign to stakeholders on the harmful impacts of gas emission and to give technological options available to prevent smoke belching and advocate or encourage self-regulation among stakeholders guided by Leonard Pasiderio, officer-in-charge of the Guimaras Environment and Natural Resources Office.

Pasiderio stated on his message that one of the targets of the Provincial Government based on its Priority Development Agenda is to ensure the good air quality of the island.

The event is a three-day activity composed of ceremonial MOA signing, orientation on the implementation of Philippine Clean Air Act and orientation and training for the Guimaras Anti-Smoke Belching Unit. (PR)