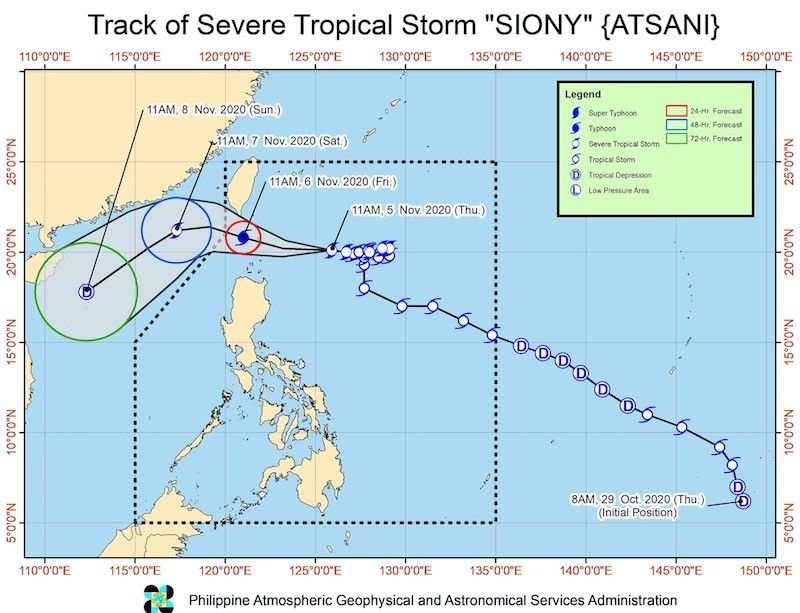 OFFICIALS have enforced preemptive evacuation and pre-positioned trucks and equipment ahead of Tropical Storm Siony (Atsani), which has been forecast to intensify into a typhoon.

It was moving westward at 25 kilometer per hour (kph) with maximum sustained winds of 95 kph near the center and gustiness of up to 115 kph.

“Siony" was forecast to make landfall in the vicinity of Batanes or Babuyan Islands on Friday morning, November 6, 2020, five days after a super typhoon devastated Bicol region.

In a statement, the National Disaster Risk Reduction and Management Council (NDRRMC) said regional DRRMC officers for areas lying in the path of the storm were gathered to discuss preparedness measures.

Preemptive evacuation have been enforced in areas that are highly susceptible to storm surge, floods and landslides.

Food, non-food items and medicines have been pre-positioned in various strategic locations.

Medical teams have been activated while mining activities, tourism activities and quarrying have been suspended.

In the Cordillera, several families living in flood- and landslide-prone in the provinces of Apayao, Kalinga, and Benguet were evacuated.

Transport assets such as army trucks and those of the Department of Public Works and Highways were pre-positioned for possible augmentation to disaster and clearing operations.

Pagasa said Siony may reach typhoon category with peak intensity of 120 kph as it passes near or over the Batanes-Babuyan Islands area.

Pagasa said Pangasinan and most parts of Central Luzon, Metro Manila, Calabarzon, Mimaropa, Bicol, Visayas, and Mindanao may also experience light to moderate with at times heavy rain showers in the next 24 hours due to “Siony”.

Meanwhile, Pagasa is monitoring a low pressure area estimated at 1,920 km east of Visayas. It is forecast to move generally west-northwestward and may enter the PAR Friday or Saturday.

This LPA is less likely to develop into tropical depression in the next 24 hours, Pagasa said. (Third Anne Peralta-Malonzo/SunStar Philippines)