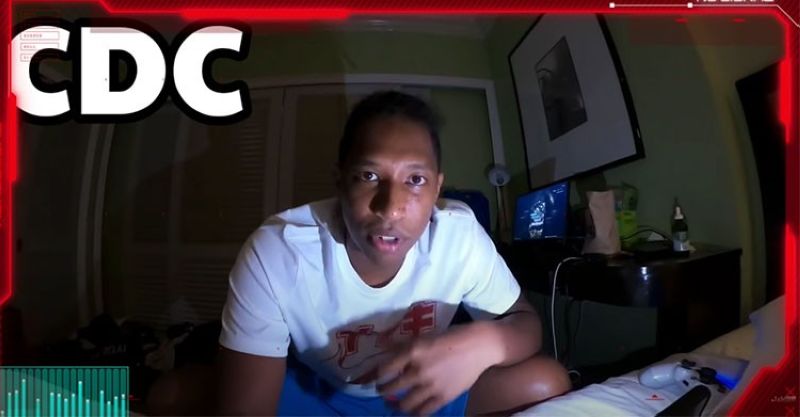 JDV THANKS CDC. Joe Devance's official YouTube channel, with approximately 34,000 subscribers, started gaining thousands of views as he records his daily "life in the bubble" since the PBA players arrived at the Quest Hotel in Clark. He thanked the Clark Development Corporation (CDC) in one of his recent vlogs. (Screen capture from JDV's YouTube channel)

GINEBRA San Miguel's Joe Devance expressed his gratitude to Clark Development Corporation (CDC) for reminding him to wear his face mask, as mentioned in one of his vlogs from his official YouTube channel recently.

"I got my friends at the CDC, they called me up on my cellphone and they were like, Joe, we love your channel. We've been watching and supporting your YouTube channel but please remind everybody in the Philippines to wear their mask," the "Big Man" of Ginebra said.

Devance also expressed his appreciation to the CDC for their concern on the recent "close encounter" he had with Ginebra fans outside the Angeles University Foundation (AUF) Cultural and Sports Center in Angeles City.

"CDC, thank you guys for hitting me up, calling me on my cellphone. I really appreciate you guys, what you're doing - helping the country out," he said.

The occurrence happened when Devance, who was about to ride their team's bus heading back to Clark, briefly removed his face mask to greet Ginebra fans outside of the AUF Gym after one of their games recently.

He, however, followed strict social distancing protocols as he was a few meters away from the die-hard fans cheering for the Barangay Ginebra team.

Devance has been active in his social media accounts -- especially his YouTube channel -- where he captures all the activities that he and his team had been doing since the first day they entered the bubble.

The gentle giant also frequently commends the Quest Hotel, its staff, and its facilities where they enjoy a wide range of activities such as swimming, jogging, playing billiards, and hitting the well-equipped gym inside Quest, among others.

In one of his vlogs, Devance went to the rooftop of Quest where he showed the lush green spaces of Filinvest Mimosa and praised the spectacular view that he and other players enjoy during their two-month stay at Clark. (PR)