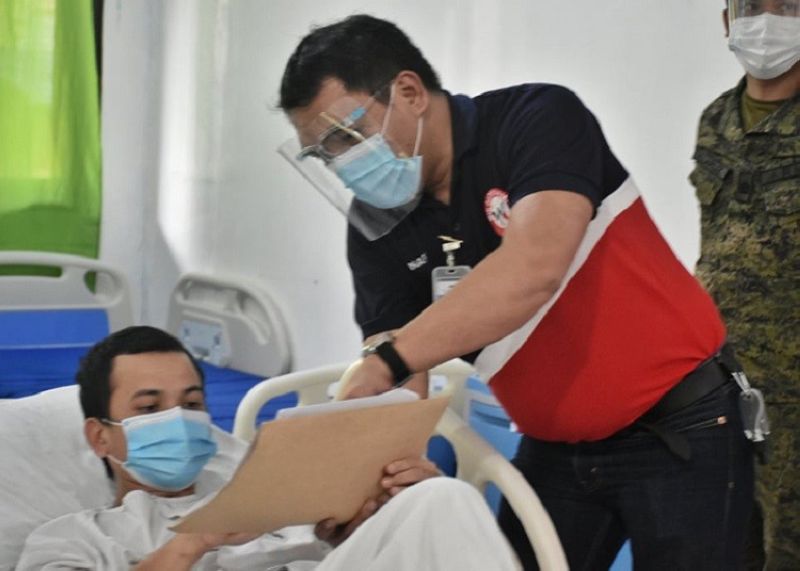 ZAMBOANGA. The Western Mindanao Command has awarded medals Wednesday, November 4, to five soldiers who survive the August 24 twin bombing attacks by Abu Sayyaf bandits in Jolo, Sulu. Senator Sherwin Gatchalian gives them financial assistance. A photo handout shows a staff of Gatchalian handing over the financial aid to one of the soldiers at Camp Navarro General Hospital. (SunStar Zamboanga)

THE Western Mindanao Command (Westmincom) has given recognition and cash assistance to five soldiers who survived the August 24 bombings by the Abu Sayyaf bandits in Jolo, Sulu.

“They are among those who incurred major injuries and were treated in private hospitals here in the city. We are happy that they are now in better condition,” Vinluan said.

Seven soldiers, a policeman and six civilians were killed while 21 soldiers, six policemen and 48 civilians were wounded in the August 24 twin bombings carried out by the Abu Sayyaf bandits in downtown Jolo, the capital of Sulu.

Senator Sherwin Gatchalian, through his representatives, has extended financial assistance to the bombing victims.

“On behalf of all the soldiers, I would like to express my sincerest gratitude to Senator Sherwin Gatchalian and his staff,” Vinluan said.

Sequitin has commended the soldiers for their extraordinary service rendered to the people of Sulu.

“They made the Westmincom and the entire AFP (Armed Forces of the Philippines) proud,” Sequitin said. (SunStar Zamboanga)