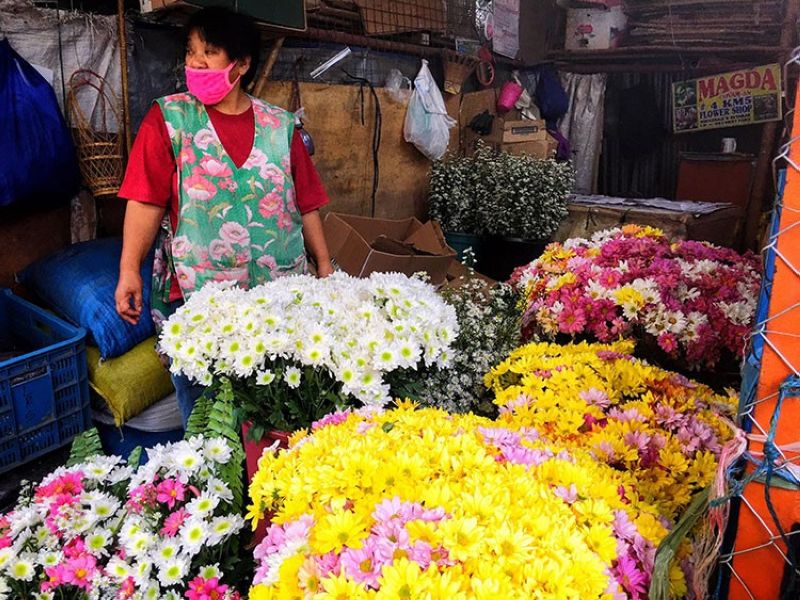 SLOW DAY. A vendor arranges flowers at a stall in Km. 5, La Trinidad. Flower vendors at the La Trinidad Public Market Parking area will be allowed to sell their blooms until November 10. (Andrey Pagulayan)

NOTING the decrease in sales, the Municipal Council of La Trinidad, through Resolution 288-2020, approved the request of flower vendors at the La Trinidad Public Market Parking area for the extension of their flower business operation.

With the recent typhoon and with the closure of cemeteries amid the Covid-19 pandemic, flower farmers were not able to gain, prompting traders at the La Trinidad Public Market parking area to request that they be allowed to operate until November 10.

"For humanitarian consideration and considering predicament of the flower vendors not being able to gain enough due to continuous rains, typhoons and the present Covid-19 pandemic, the body grants their request to sell their products," the resolution stated.

Cutflower farmers in Benguet's capital town started to plant as early as July and August in time to harvest and sell their produce during the All Souls' and All Saints' Day (Undas).

But their sales failed to pick up with the unprecedented events, such as the Covid-19 pandemic, typhoons and closure of cemeteries.

In September, the Inter-Agency Task Force for the Management of Emerging Infectious Diseases (IATF) issued Resolution 71, which orders a mandatory closure of all cemeteries and columbaria nationwide from October 29 to November 4 or during the days before, on, and after All Souls' and All Saints' Day as a way to prevent mass gatherings during those two important holidays.

This resulted in local governments ordering stakeholders to visit cemeteries ahead of the closure of all cemeteries.

Cutflower farmers and traders would have increased their sales during Valentine's Day, Christmas, Holy Week, church gatherings, and festivals including the Undas.

However, with the closure of cemeteries, not all were able to sell their produce.

"Some were able to sell 30 percent, 20 percent, and others half of their produce," said Andy Colte, president of La Trinidad Cutflowers Organic Growers Association (LaTCOGA).

LaTCOGA is a federation with 2,000 active members from the 16 barangays of La Trinidad and neighboring Benguet towns such as Atok, Tublay, some parts of Kibungan and Sablan.

This year, ahead of the closure of cemeteries, more than 57 stalls were put up for farmers hoping to sell roses, anthuriums, chrysanthemums, potted plants that reach Manila, Pampanga, Bicol, Calabarzon, Palawan, Bataan and other provinces in Mindanao.

Mayor Romeo Salda noted few sales of flower farmers because of few buyers on October 15 to 28.

He said stakeholders were also asked to dismantle their booths in preparation for the typhoons last week.

Chrysanthemum ranks number one among ornamental crops in Benguet due to the favorable climatic conditions.