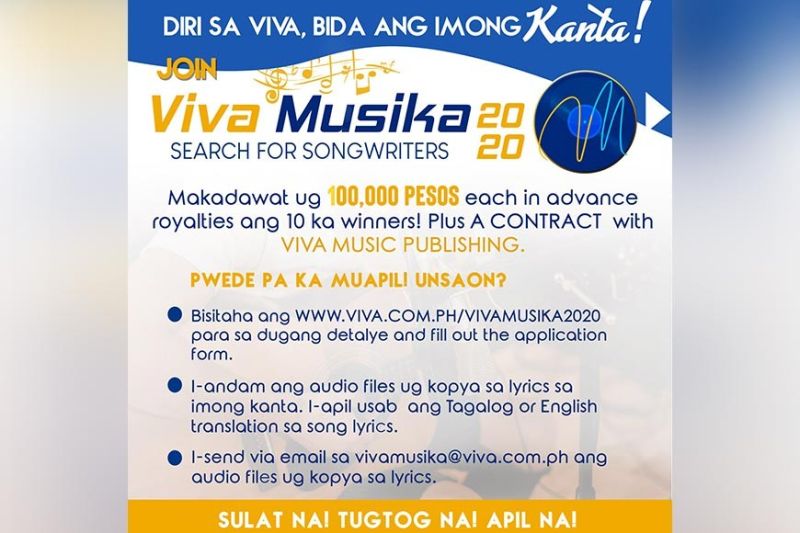 INTO songwriting? This competition might be the one for you.

At present, Viva Records has already screened more than 500 songs and more songs are coming.

"We've heard a lot of really good songs in the weeks since we started the search. And it's not just pop, but a whole lot of other music styles that we're getting and hearing from all these talented songwriters," Viva Records said.

With the good turnout, Viva Musika now turns its attention to the creatives from down south as they encourage songwriters from Cebu, Davao, Cagayan De Oro, Zamboanga, Tacloban, Roxas, Iloilo, and Bacolod to also send in their songs.

Viva's main man, Boss Vic Del Rosario, believes that the south is a talent-rich area that has its own style and sound.

"The south has always had their share of hitmakers," said the veteran star-maker, who for the past few years now, has established an extension of his multi-media company in the area and aptly called it Viva South.

Viva Musika is an extension of those efforts.

"We want to tap into the songwriting talent that the south has a natural abundance of," said Del Rosario, adding: "We want to discover the next Top Suzara (of Southborder), the next John Roa and Karencitta in Cebu, Davao, CDO and of the greater south."

The "Viva Musika Search For Songwriters" offers a cash prize of P100,000 to every songwriter that will pass Viva's stringent screening. Plus a publishing contract to the songwriters whose music will be chosen.

Once these songwriters become a part of Viva Music Publishing, their songs will have a better chance of being heard and recorded by Viva's top recording artists.