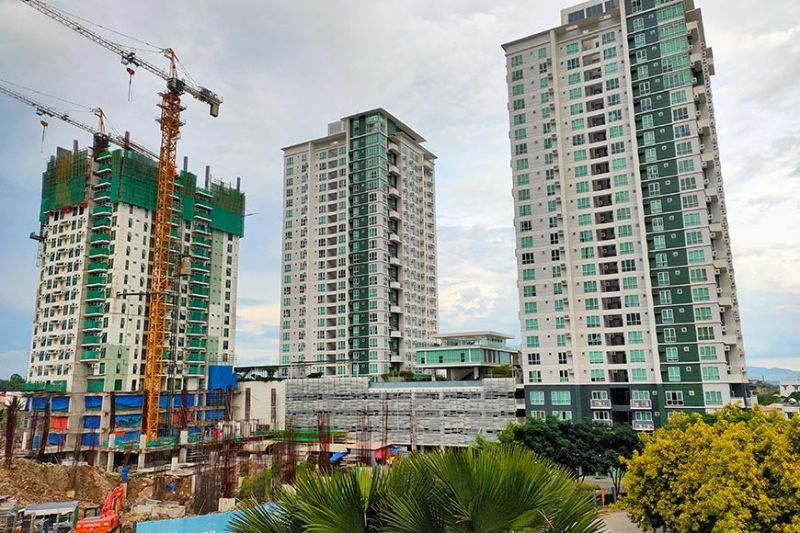 SLOWDOWN. The subsectors of construction and real estate and ownership of dwellings saw a contraction of 39.8 percent and 22.5 percent, respectively, in the third quarter of 2020. (RJ Lumawag)

THE Philippine economy is seeing signs of recovery after it contracted by 11.5 percent in the third quarter of 2020 from a contraction of 16.9 percent in the second quarter.

The economic managers of the country said the double-digit contraction in the third quarter is not surprising given the return to more stringent quarantine measures in NCR and neighboring provinces, and Cebu City, which together account for around 60 percent of the Philippine economy.

"Nonetheless, the economy has begun to recover. On a quarter-on-quarter basis, the economy grew by 8 percent in the third quarter, reflecting the return of economic activities as the quarantine was eased," they said on Tuesday, November 10, 2020.

Data from the Philippine Statistics Authority (PSA), showed that there was an improvement in the industry and services sectors while there was a slowdown in the growth of the agriculture, forestry and fishing (AFF) sector.

"Both industry and services also showed a smaller contraction, consistent with the initial recovery of employment, where some 7.5 million workers returned in the third quarter. This reduced the unemployment rate to 10 percent in July from 17.7 percent in April, when the quarantine was at its strictest," the economic managers said.

PSA reported that the industry sector declined by 17.2 percent in the third quarter of 2020.

"This was, however, an improvement from the steepest decline of 21.8 percent recorded in the second quarter," PSA said in a statement.

Pulling down the growth of the industry sector are the construction and manufacturing sub-sectors, which contracted by 39.8 percent and 9.7 percent, respectively.

"Services declined by 10.6 percent in the third quarter of 2020, however, slower than the 17.0 percent contraction in the second quarter 2020 -- the steepest decline ever registered," PSA said.

Among the subsectors under services, real estate and ownership of dwellings and accommodation and food service activities saw the largest contraction at 22.5 percent and 52.7 percent, respectively.

Meanwhile, the agriculture sector's 1.2 percent growth in the third quarter slowed down from 1.6 percent in the second quarter. The slowdown was due to "a number of plant and animal diseases."

Earlier this year, the country's hog industry was threatened due to the African Swine Fever, which resulted in the culling of thousands of hogs. Its effects continue to linger. The banana industry is also being plagued by the Fusarium Wilt or Panama Disease.

"These headwinds, however, had minimal effects on overall food supply as evidenced by falling food inflation in the same period," the economic managers said.

The economic managers added that consumption is seeing signs of recovery.

"On the expenditure side, households and firms have begun to recover, with smaller contractions in household consumption, firm investments, exports, and imports. In particular, goods exports grew by positive 2.2 percent in September, as the economy of our major trading partners in the region recovered, notably China," they said.

PSA reported that Household Final Consumption Expenditure (HFCE) contracted by 9.3 percent in the third quarter of 2020.

In terms of exports, the PSA reported that it has contracted by 14.7 percent in the third quarter of 2020, an improvement from 35.8 percent in the second quarter.

Imports of goods and services declined by 21.7 percent in the third quarter of 2020, but is an improvement from the 37.9 percent contraction recorded in the second quarter.

"Our continued efforts have shown that we have been able to gradually resume economic activity while observing the strict implementation of minimum health protocols. With more people able to return to work and earn income, we are optimistic that we will be able to revitalize consumption and enhance the production capacity," Department of Trade and Industry (DTI) Secretary Ramon Lopez said.

Meanwhile, government consumption growth slowed to 5.8 percent after "the expiration of Bayanihan 1 in June and Bayanihan 2 still in Congress."

"According to the Department of Budget and Management (DBM), actual infrastructure disbursement in the third quarter exceeded programmed levels by 12.1 percent, although this was lower than third quarter 2019 level by 28 percent in real terms. This is not surprising given the catch-up spending carried out in the second half of last year after the late passage of the 2019 budget," the economic managers said.

The economic managers said government policies have been put in place to manage the risks brought by the pandemic and at the same time open the economy safely to accelerate the recovery.

"The Cabinet has recently approved measures to further open up the economy in the fourth quarter, subject to enforcing the minimum health standards and enhancing the Prevent, Detect, Isolate, Treat, Reintegrate or the PDITR strategy," the economic managers said.

DTI has also been issuing guidelines to allow more sectors to expand capacity to between 75 and 100 percent. The Department of Transportation (DOTR) has also issued guidelines to increase public transport capacity.

"At the same time, as the economy opens up, the government continues to ensure hospitals are equipped and preparation for vaccine procurement is underway," the economic managers said.

The proposed Create Act, Guide Act, and Fist Act are seen "to help the economy bounce back."

"Create will lower the corporate income tax outright from 30 percent to 25 percent as soon as it is made effective. This will be the biggest stimulus package ever for businesses, benefiting mostly micro, small, and medium enterprises (MSMEs) that comprise 99 percent of businesses and employ over 60 percent of Filipino workers," the economic managers said.

They added that the Fist Act "will help banks dispose non-performing loans and assets so they can free up money and capital to extend more credit, especially to small businesses."

The economic managers also underscored that the timely passage of the 2021 budget "is crucial in helping attain the 6.5 to 7.5 percent GDP growth target for next year."

The P1.121 trillion infrastructure budget is seen to produce some 1.7 million jobs.

"A delay in the passage of the budget will be detrimental to the economy and our recovery. Each day of delay will result in P1.1 billion not spent," the economic managers said.

Lastly, the economic managers urge the public to cooperate in controlling the spread of the virus as the government reopens the economy.

"A major part of our success in controlling virus transmission is the cooperation of people in making the minimum health standards a part of their daily lives. All these small contributions go a long way in our recovery process," they said.