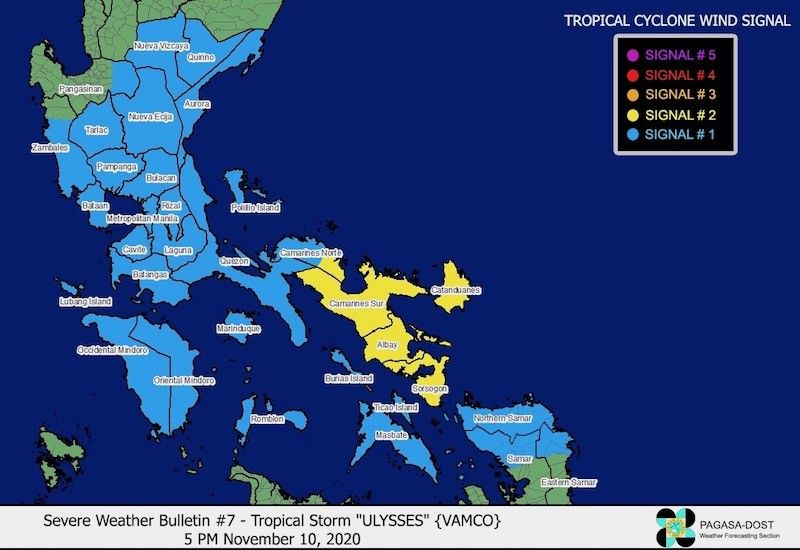 (UPDATED) The Bicol region, which was pummeled by two typhoons within a week of each other, is again under threat from another storm.

Tropical Storm Ulysses (Vamco), which has intensified into a severe tropical storm as of 8 p.m. Tuesday, November 10, 2020, will be the third tropical cyclone to hit Bicol in just three weeks, after Typhoon Quinta (Molave) on October 25 and Super Typhoon Rolly (Goni) on November 1.

At 7 p.m. Tuesday, it was spotted at 425 kilometers east of Daet, Camarines Norte. It has accelerated and was moving west northwestward at 30 kilometers per hour (kph) compared to a speed of only 15 kph about three hours earlier.

It has further intensified and was packing maximum sustained winds of 95 kph near the center and gustiness of up to 115 kph. Pagasa said "Ulysses" will intensify into a typhoon by Wednesday morning.

It was initially forecast to reach its peak intensity of 130 to 155 kph by Wednesday afternoon or evening.

Pagasa said it will turn westward, its track close to Catanduanes and Camarines Norte, on Wednesday.

It was forecast to make landfall over Quezon on Thursday, November 12.

“However, slight southward shift in the orientation of the track forecast shows an increasing likelihood of landfall over Bicol region tomorrow (Wednesday) afternoon or evening,” Pagasa said.

In Catanduanes, over 2,000 families have been preemptively evacuated.

Local authorities said they don’t have enough evacuation centers in the province because some were damaged by Typhoon Rolly.

The NDRRMC said over 26,000 houses were destroyed by Typhoon Rolly. Majority were in Bicol.

He said they have already prepositioned the relief goods for those who will be displaced. (SunStar Philippines)