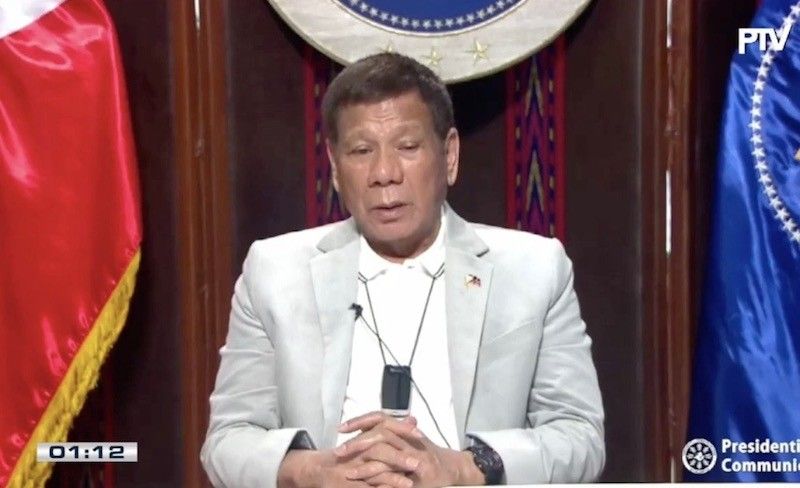 PRESIDENT Rodrigo Duterte on Thursday, November 12, 2020, called for bayanihan and assured that “government is on top of the situation” in the wake of the massive damage wrought by Typhoon Ulysses (Vamco) in Metro Manila and most parts of Luzon.

“As President, I guarantee you that your government will do its best to provide assistance in the form of shelters, relief goods, financial aid and post-disaster counsel. Rest assured, the government will not leave anybody behind,” he said in a televised address to the nation shortly after he delivered a speech during the virtual 37th Asean Summit.

“We will get through this crisis, I assure you. As one nation, kapit po tayo. Mga kababayan, mag-bayanihan po tayong lahat,” he added.

Bayanihan is the Filipino custom of civic unity and cooperation.

He also called on all local government units and concerned agencies to prioritize the well-being and safety of the affected population.

To his critics, Duterte said the government has been closely monitoring the situation on the ground.

“May mga nagsabi na walang ginawa, natutulog - wala kaming tulog dito,” he said. (Some people are saying that we are not doing anything. We haven’t had any sleep.)

He said soldiers, policemen and emergency responders have been on standby to provide assistance even before the typhoon struck.

“The goods are there, people have been mobilized and deployed, kaya pagdating ng bagyo, nand’yan, nagtrabaho na sila,” he said.

Duterte said he wished he could go out, but his physician and the Presidential Security Group prohibit him because of the risk of contracting coronavirus disease 2019 (Covid-19).

Typhoon Ulysses pummeled Metro Manila Wednesday night, November 11, with intense rains and winds of 155 kilometers per hour (kph) and gustiness of up to 205 kph, causing massive flooding and cutting off electricity for around four million households and commercial/industrial consumers.

Marikina City Mayor Marcelino Teodoro described the flooding in his city as worse than the flooding caused by Typhoon Ondoy in 2009, which also sent residents scampering up to their roofs for safety.

The typhoon was the third to barrel through parts of Luzon in just three weeks, after Typhoon Quinta (Molave) on October 25 and Super Typhoon Rolly (Goni) on November 1. (Marites Villamor-Ilano/SunStar Philippines)