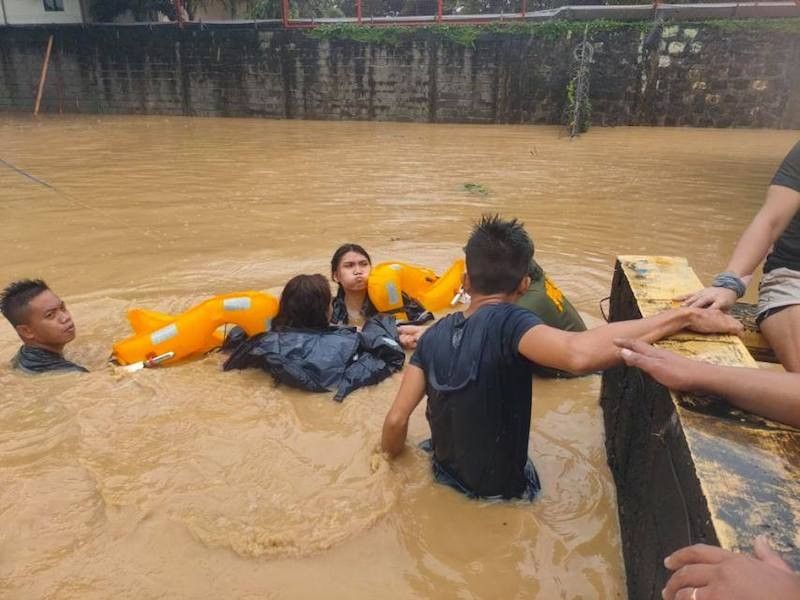 POLICE are verifying a report that a person in the Bicol region had died from the onslaught of Typhoon Ulysses (Vamco).

No other information on the reported fatality has been confirmed as of Thursday afternoon, November 12, 2020.

Meanwhile, over 80,000 families were forced to leave their homes along the path of the typhoon, which struck southern Luzon and Metro Manila Wednesday evening, November 11, with intense to torrential rains and howling winds of 155 kilometers per hour (kph) and gustiness of up to 2015 kph.

As of 10 a.m. Thursday, the Philippine National Police said a total of 81,047 families or 301,765 individuals were forced to evacuate and were staying in 13,526 evacuation centers.

The typhoon’s intense rainfall since Wednesday evening caused massive flooding in several parts of Metro Manila and nearby provinces.

Some families, especially in the City of Marikina, were trapped on their roofs. There was no time to evacuate because the floodwaters suddenly rose to as high as five feet in some areas.

The PNP said 411 areas, mostly in the National Capital Region, Calabarzon and Bicol region, were reportedly flooded while 104 road sections were reportedly not passable due to flood.

It said 806 persons or 64 families were rescued by the PNP.

A total of 3,261 search-and-rescue personnel have been deployed by the PNP along with rescue vehicles.

In another report, the National Capital Region Police Office (NCRPO) said as of 12 noon the number of families evacuated went up to 4,569 or 18,308 individuals.

It said 401 search-and-rescue personnel were deployed in Metro Manila.

(We moved those under quarantine in tents to hotels beginning 3 a.m. or 4 a.m. By 6 p.m., most have transferred to hotels. We could not house them in the same evacuation center as other evacuees who are not infected.)

The PNP said flights in all terminals at the Ninoy Aquino International Airports were cancelled as of 12 midnight.

The Civil Aviation Authority of the Philippines (CAAP) said it has not recorded any major damage in airports under their control except the mild flooding in the apron of the Plaridel Airport.

“Cracked door panels and water leakages were also reported in its tower building due to storm surges. The airport facility experienced power interruption around 4:45 a.m. today,” it said.

CAAP said Sangley Airport's Runway 07, hangar, and general aviation area were flooded while the others were experiencing power interruption.

“CAAP airport managers are still ordered to be on high alert and to closely monitor their respective airports. Situation reports are also continuously monitored and consolidated by the CAAP Operations Center,” CAAP said.

The Bureau of Corrections, on the other hand, said there was no major damage recorded in the New Bilibid Prison (NBP) as well as in the Correctional Institution for Women (CIW) in Mandaluyong City amid the onslaught of Typhoon Ulysses. It said all persons deprived of liberty were safe and accounted for.

It said power supply has already been restored at the NBP but not yet in CIW.

“NBP hospital is using emergency lights at this time. Four empty isolation tents in front of the hospital building were damaged and are now being dismantled for repairs,” Bucor said in a statement.

“Lots of fallen trees obstruct roads inside NBP reservation but are mostly cleared. Organized clearing teams are doing their job at this time,” it added.

Work in government offices and classes in all levels have been suspended since Wednesday afternoon. (SunStar Philippines)