3 dead due to Typhoon Ulysses 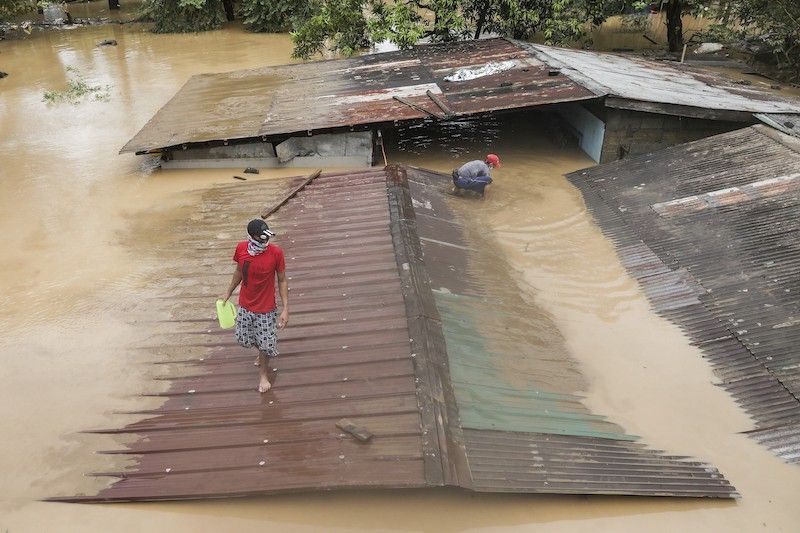 MANILA. A man walks on top of a roof of a submerged house as floods inundate villages due to Typhoon Vamco in Rizal province, Philippines on Thursday. November 12, 2020. (AP)

Two of the fatalities were in Bicol region, which was also battered by previous typhoons “Quinta” (Molave) and “Rolly” (Goni).

The Office of the Civil Defense in Bicol (OCD-5) said on Thursday, November 12, 2020, that the two fatalities were from Daet and Talisay in Camarines Norte. It did not provide the cause of death.

The third fatality was from Benguet province in the Cordillera region. According to the Provincial Disaster Risk Reduction and Management Office, a 60-year-old man died after his house was hit by fallen bamboo trees.

Of the four missing persons, three are from Vinzons town. The fourth is from Mercedes.

Four people were also injured in Mercedes, Basud, Daet, and Vinzons, all in Camarines Norte.

The National Disaster Risk Reduction Management Council (NDRRMC) said a total of 363 teams, or more than 1,500 uniformed personnel, have been deployed to assist local government units (LGUs) in rescue operations for people trapped on their roofs and in their homes by massive flooding caused by the typhoon.

He said they have received over 90 search and rescue requests have been received as of noontime from the affected regions, namely, Cagayan Valley, Central Luzon, Calabarzon, Mimaropa, Bicol, Cordillera and National Capital Region (Metro Manila).

Priority is given to worst hit areas like Marikina and Pasig cities in Metro Manila, and the towns of Rodriguez and San Mateo in Rizal province.

Several areas in Bulacan and Cavite were also flooded.

Timbal said the number of evacuees is still expected to increase as rescue operations are still ongoing.

At least 67 road sections were rendered not passable in the affected regions due to flooding while there were at least 82 cities and municipalities that reported power outage.

The NDRRMC said 1,632 passengers in ports in three regions as well as 150 rolling cargoes and other sea vessels were stranded due to bad weather. (SunStar Philippines)