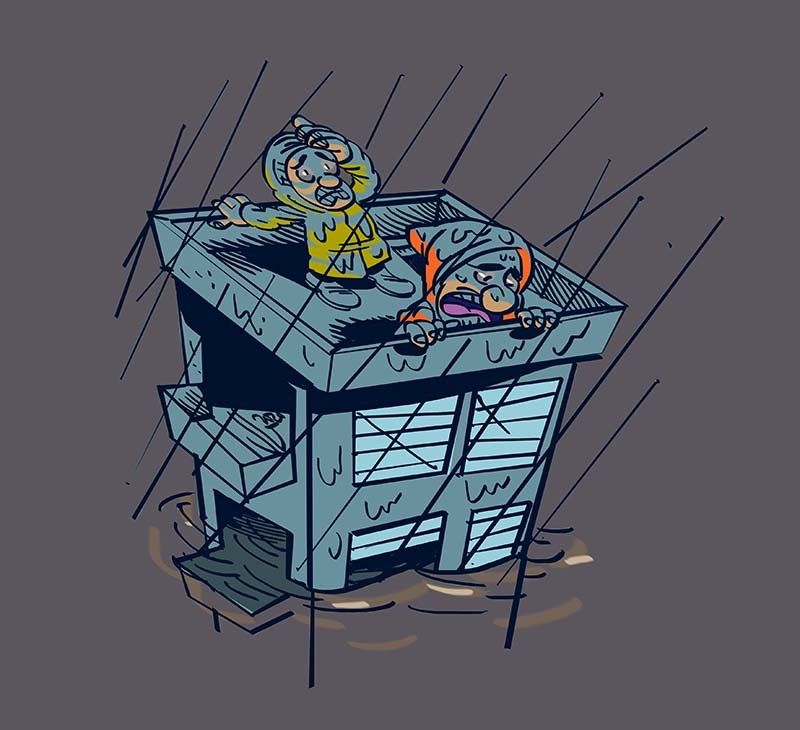 It is local fisherman jargon, which means urgently removing swelling water inside an outrigger hull to keep it afloat amid rough seas.

With three storms sweeping the northern part of the Philippine archipelago, we have a whole lot of “limas” or hauling to keep ourselves above water. The recent spate of images of inundation typhoon Ulysses had caused is simply devastating—it’s an illustration of communities overwhelmed, helpless in the face of nature’s fury.

Following a public clamor for leadership presence, President Rodrigo Duterte addresses the nation, “Gusto kong lumabas, gusto kong lumangoy. Matagal na akong hindi naligo eh. Kaya lang ayaw nitong mga sundalo... It’s not that I am at a distance from you...gusto kong pumunta doon, makipaglangoy nga sa inyo, ang problema pinipigilan ako kasi raw pag namatay ako isa lang ang presidente. Sabi ko eh may VP naman...wala naman silang sinasagot (I want to go out, I want to swim. Been a long time I haven’t taken a bath. But the soldiers won’t allow me...It’s not that I am at a distance from you...I want to go there, to swim with you, the problem is they don’t want me to because there is only one president. I said but there is a VP...and nobody answers).”

Sadly, humor and sarcasm won’t haul the volume that sank houses in affected provinces up to the roof, leaving hundreds of families cringing cold on rooftops praying for rescue.

What went wrong? Is it really a case of nature outwitting man? A bit of trail-tracing into the country’s scientific strides in disaster risk reduction and management shows it was men outwitting each other in the heartless game called politics. Stopped dead in its tracks was Project Noah (Nationwide Operational Assessment Hazard), launched in 2012 as a flagship program of the Aquino administration following the 2011 Sendong experience, which struck Northern Mindanao, the Visayas and Palawan, killing 957 people. While still in its development stage, the project did not sit well in the public imagination following the Yolanda onslaught in 2013. But the project soldiered on under the wing of the Department of Science and Technology (DOST), keeping into its fold 80 disaster scientists who had invested time, effort and intelligence beyond the call of duty to advance the country’s technological response to climate whims.

All of its project components were geared toward creating technologies in disaster response, such as the use of light detection and ranging technology to map out flood-prone areas, the use of rain gauge censors and early warning via mobile applications.

Just when the project was about to download hazard and vulnerability hazard maps to the town level under its program Integrated Scenario-Based Assessment of Impacts and Hazards in 2017, the new administration severed the budget for Project Noah, turning it over to the Philippine Atmospheric, Geophysical, Astronomical Services Administration (Pagasa), but it was the University of the Philippines that eventually took it.

Such a big loss as far as its capacity to directly inform public policy was concerned after the DOST and Pagasa turnover.

For the scientists under the lost project, the effects of typhoon Ulysses are hardly any surprise, which is why it may be best that government must revisit what it recklessly shelved or waylaid despite its achievements.