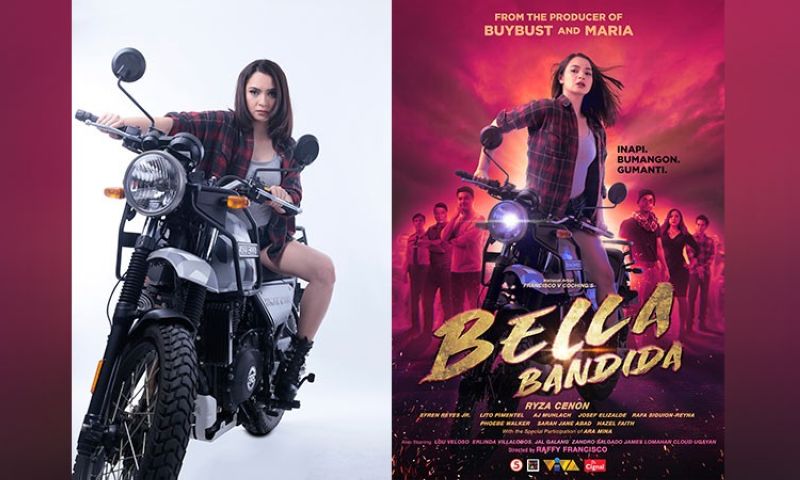 "I am really excited about this new show. I am excited because of the action scenes, talagang pinaghandaan, may training akong ginawa dito kaya memorable ito na project for me (we really prepared for this. I even went for training that's why this project is very memorable for me)," she said in a virtual press launch on Tuesday, November 10.

Cenon also surprised everyone as she shared that she was pregnant while doing the fight scenes.

"I only found out that I was pregnant after the shooting, don't worry safe naman po kami ni baby," she shared.

Cenon just gave birth to her firstborn, Night, on October 31.

Who is Bella Bandida?

welfare of the people of Santiago, her hometown. Her boyfriend, town councilor Brick Ortaleza (Josef Elizalde), also intends to change the corrupt political system as he is being groomed to be the next mayor.

At present, the town of Santiago is under the governance of Timothy Gregory Ortaleza, a.k.a "Mayor Tigro" (Efren Reyes Jr.). When Bella finds out that he is authorizing a mining operation, she bravely confronts him about it since she knows the bad effect it could bring to the town, most especially the tribe where she belongs.

But Bella ends up getting raped. The culprit is the mayor himself, along with Santiago's chief of police, Col. Emmanuel Barbaro (Lito Pimentel), and one highly skilled assassin named El Pistulero (Rafa Siguion-Reyna). Mayor Tigro even wants her dead, but his murder attempt fails.

Bella is saved by a rebel named Chris (AJ Muhlach), but more than that, a higher power gives her a second life. May'ari, the goddess of moon and night, endows her with superpowers. Bella Bandida is born, a female action hero who uses her powers to fight against the injustices in Santiago.

Asked on what makes Bella Bandida a role model for Filipinas, Cenon said: May paninindigan siya (She has principles and stands for what she believes in); ipaglalaban niya ang dapat at tama (She fights for justice); and lahat gagawin niya para sa taong mahal niya (she will doing anything for the people she loves).

From the producer of "BuyBust" and "Maria", Bella Bandida, an action-drama series loosely based on the comic book by National Artist Francisco V. Coching, is set to premiere on TV5 on November 26, 2020, 9:30 p.m.