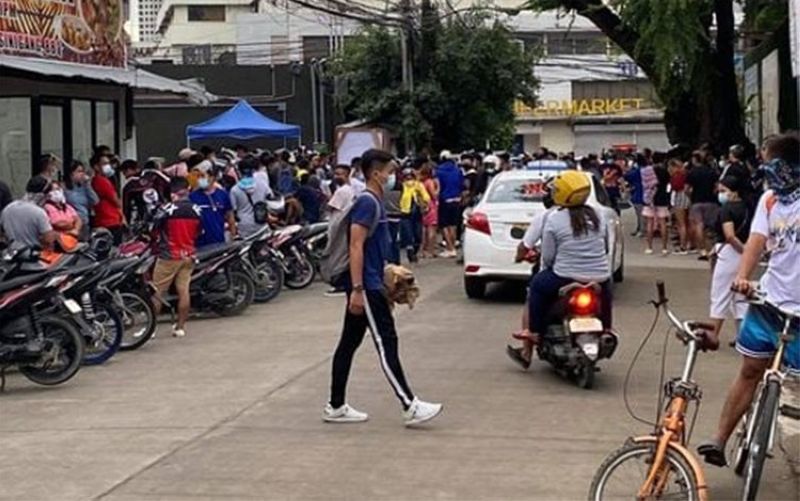 And probably being seriously considered: (3) No store sales that offer such irresistible come-ons as "three shoe pairs for P998."

The store was shut down "indefinitely" for not having a business permit and permit to make the promo. Not for the sale that drew the huge crowd.

The owners said the store is going to "bounce back," maybe with the permits this time -- and the ways to limit and manage the crowd. Perhaps reduce the three shoe pairs to two for P998?

Cebu City Councilor Joel Garganera, deputy chief implementer at the city's Emergency Operations Center, was reported in a SunStar Superbalita news report as worrying over the Covid-19 numbers in the city as of Tuesday, November 10.

He said that for the past seven days, there have been more cases of infection than recoveries: 13 from 11 barangays, following weeks when there were only single-digit or zero positive cases.

More worrisome to Garganera are the Wednesday, November 11, numbers, provided by another source: 28 cases from 10 barangays, with these topping the list: Guadalupe (7), Labangon (5), Luz (3) and Apas and Talamban (2). Six persons, coming from provinces outside Cebu, were found to have been infected, Garganera said. As of Thursday, November 12, active cases in the city rose to 131.

To compare, Cebu Province had 36 new cases, with these towns heading the list: Boljoon (5); and Consolacion, Danao City, Minglanilla, San Fernando and Talisay City (3 each). Lapu-Lapu City had 6 new cases and Mandue City, 8.

Garganera sees the new data as a warning. "We need the cooperation of the entire populace."

What must be really worrisome to Cebu residents was Garganera's statement that there might be a new lockdown in Cebu City before the end of the month, "if the trend continues."

He didn't call for the vaunted resilience of Cebuanos.

At the November 11 regular session of the Cebu City Council, Vice Mayor Mike Rama, the presiding officer, asked the councilors not to travel outside Cebu City if they could help it.

Not so much for the risk of coronavirus infection as for the required quarantine of travelers when they return. Councilor Niña Mabatid was absent October 14 and 21 and November 4 and the council secretary said it was due to the quarantine, probably self-imposed, which she underwent after her travel.

VM Rama asked for Mabatid's whereabouts at the November 4 session. He was concerned about her absences, partly over her health but, maybe more urgently, because he wanted her to take oath to his anti-Covid protocol enforcement movement. He had sworn in the other councilors as honorary PEM marshals. In this week's session, Mabatid took her oath and got a t-shirt from Rama. No oath, no t-shirt, Mike said.