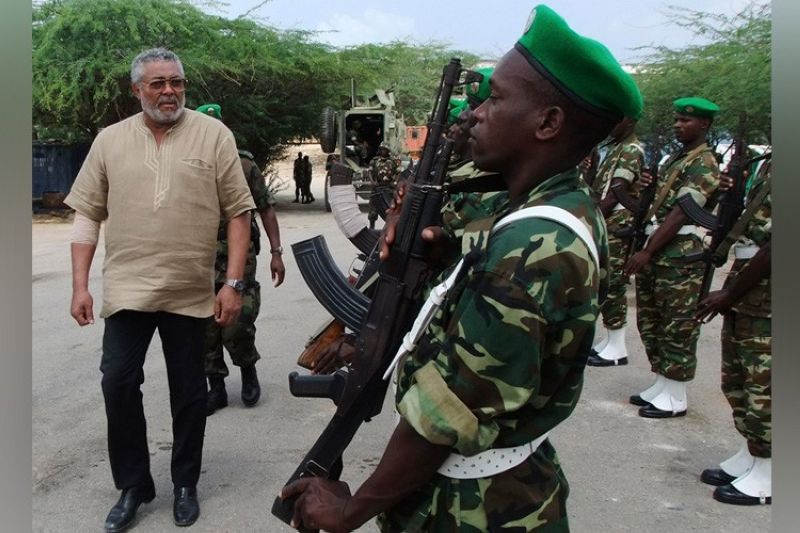 In this Wednesday, July 20, 2011 file photo, the African Union envoy to Somalia, Jerry Rawlings, inspects a guard of honour of African Union peacekeepers, during a visit to displaced persons camps in southern Mogadishu, Somalia. Ghana's former president Jerry Rawlings, who staged two coups and later led the West African country's transition to a stable democracy, has died aged 73, according to the state's Radio Ghana and the president Thursday, Nov. 12, 2020. (AP File Photo )

ACCRA, Ghana — Ghana’s former president Jerry Rawlings, who staged two coups and later led the West African country's transition to a stable democracy, has died, according to the state’s Radio Ghana and the president. Rawlings was 73.

President Nana Akufo-Addo said that Rawlings died Thursday morning at the Korle Bu Teaching Hospital in the capital, Accra, where he had been receiving treatment after a short illness.

“A great tree has fallen, and Ghana is poorer for this loss,” he said in an official statement after sending condolences to the family and announcing that flags would fly at half-mast for 7 days as the nation prepares for a state funeral.

Rawlings was born in 1947 to a Scottish father and a Ghanaian mother who died in September at the age of 101. Rawlings, who trained as an air force officer, came to power in 1979 after leading his first coup, and then transferring power to civilian rule soon after.

In December 1981, he staged a second coup and was Ghana's military leader until he introduced multi-party elections in 1992 that returned the country to democracy. He won the elections and was sworn in as president in 1993 and served two elected four-year terms, leaving office in 2001.

His longtime friend and later his rival, Maj. Kojo Boakye Gyan who served as spokesman for the party that took over after the first coup, told The Associated Press that Rawling’s death was a loss for Ghana.

“He was God’s gift to the country and l can only ask that God keeps his soul in peace,” said Gyan.

Soon after his death was announced, crowds started gathering at his Ridge Office in Accra.

Rawlings is survived by his wife, Nana Konadu Agyeman, whom he met while at Achimota School. They have three daughters: Zanetor Rawlings, Yaa Asantewaa Rawlings, Amina Rawlings; and one son, Kimathi Rawlings. (AP)