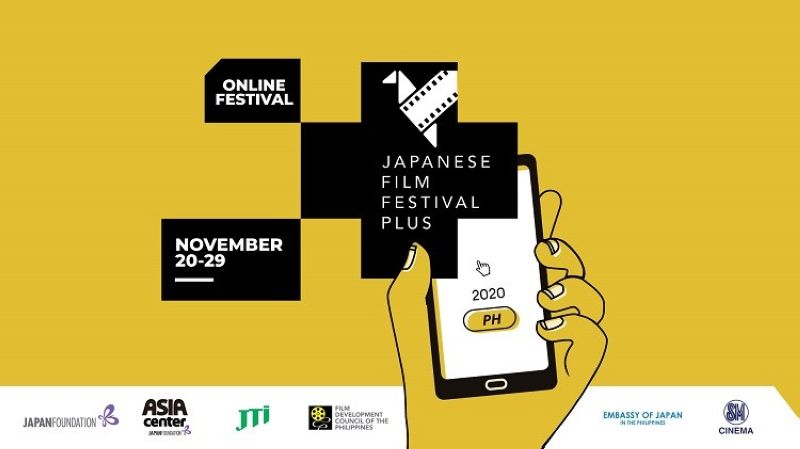 DESPITE the global pandemic, the Japan Foundation Manila (JFM) continues its tradition of bringing quality Japanese films and sharing its diverse culture to the Filipino people through the digital edition of the Japanese Film Festival, dubbed JFF PLUS: Online Festival, screening from November 20 to 29, 2020.

The featured films will be streamed online, instead of screening in movie theaters. Suzuki Ben, director of the Japan Foundation Manila, feels excited to see the event's new format and happy to bring the JFF Plus: Online Festival to every Filipino home.

“In this time when we can’t go out and visit places, films allow us to take glimpses into new worlds, experience things, see places and gain new perspectives while staying safe in the confines of our homes. Online movies have become the trend due to the pandemic. The internet has also become a venue for instant exchange of information and culture,” said Suzuki.

Since 2016, Japan Foundation has rebranded its most-anticipated film event and began to call it simply the Japanese Film Festival. It started in Asean countries and Australia and expanded its reach to China, India and Russia.

With a central mission to promote Japanese film around the world, the Japanese Film Festival positions itself as an avenue to celebrate Japanese culture in the Philippines and increase people’s interest in Japanese films, as well as bridge the Asia-Pacific film market and the Japanese film industry for possible collaborations.

In March, here in the Philippines, JFM bid sayonara to the popular “Eigasai” brand and embraced the “Japanese Film Festival” with a fresh selection of fun and exciting films this November.

This year, the festival put the spotlight on 28 short and full-length feature films in various genres, which will be available for 24 hours in the newly launched JFF Plus, a website run by the Japan Foundation to spread Japanese films overseas.

Aside from the featured films, everyone will get to know more about the film directors in the Watch section of the website or the official JFF Plus YouTube channel. There, they can watch the interviews of directors Imaizumi Rikiya, Okita Shuichi, Soda Kazuhiro, Yashiro Takeshi and Shiraishi Kazuya conducted by film critic Mark Schilling.

“To make this film festival both successful and safe for everyone during this time, we have made these films available online. Let's stay home and enjoy watching Japanese films," concluded Suzuki.

The JFF Plus: Online Festival is made possible together with Japan Foundation Asian Center, in partnership with JT International (Philippines), the Film Development Council of the Philippines, the Embassy of Japan in the Philippines and SM Cinema.