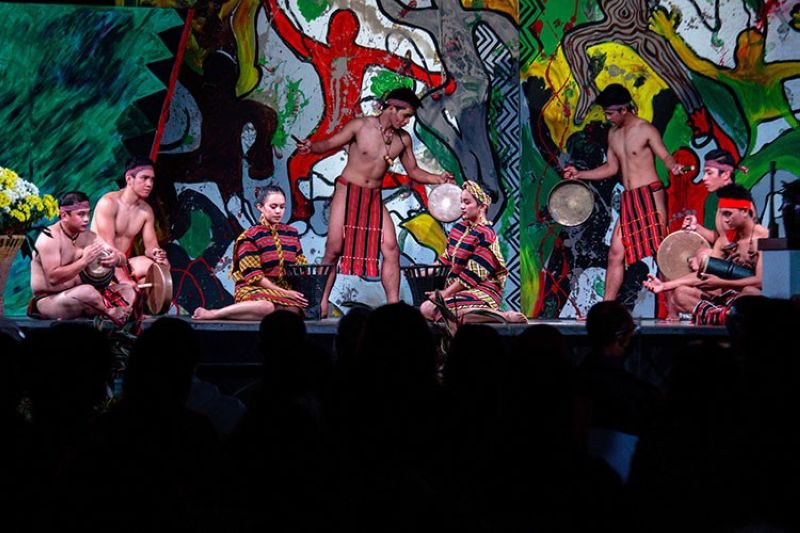 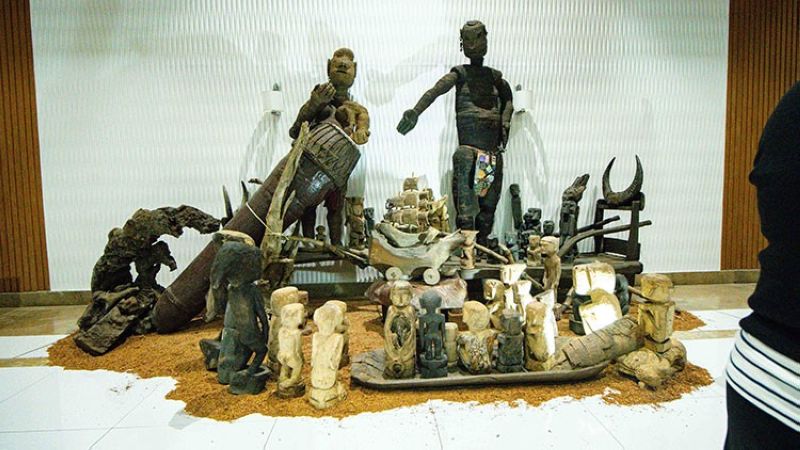 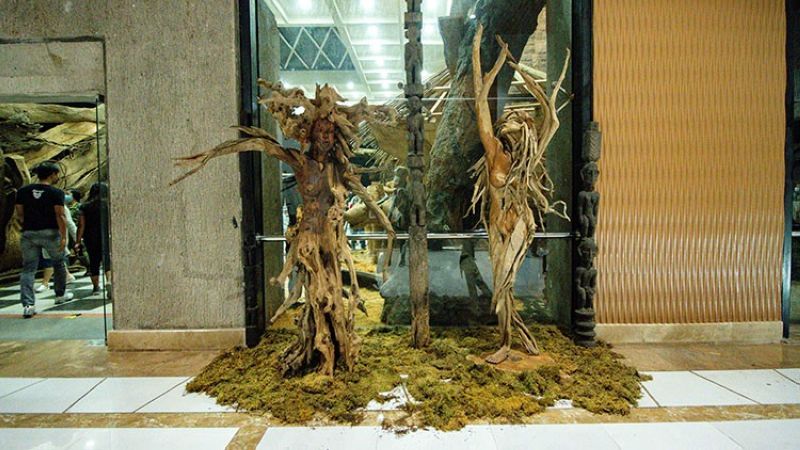 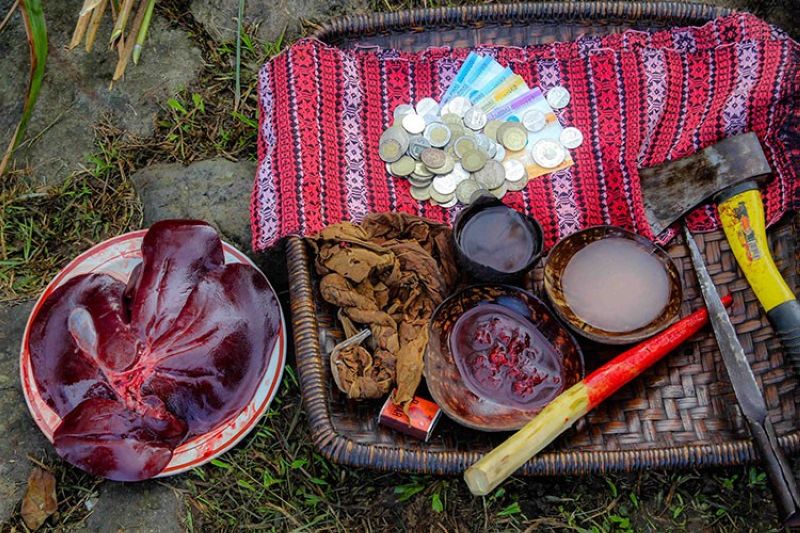 BAGUIO. The tools used and offerings during the "owik" ritual. (Photo by Jean Nicole Cortes) 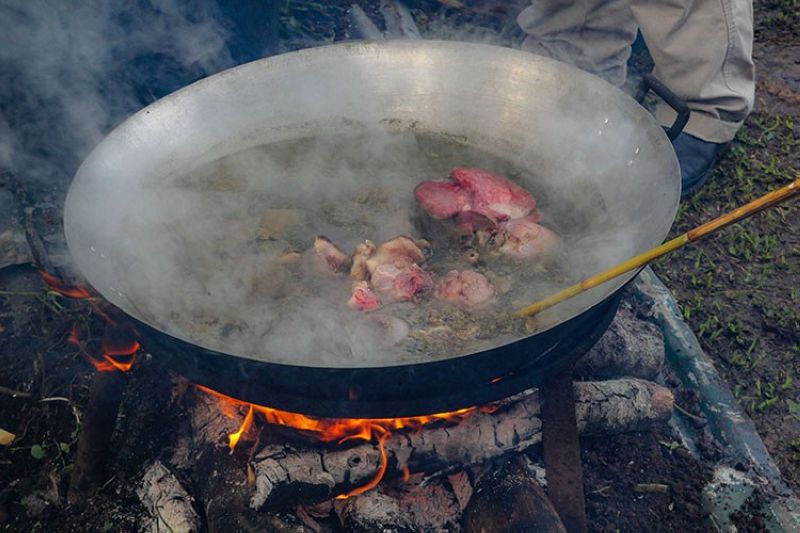 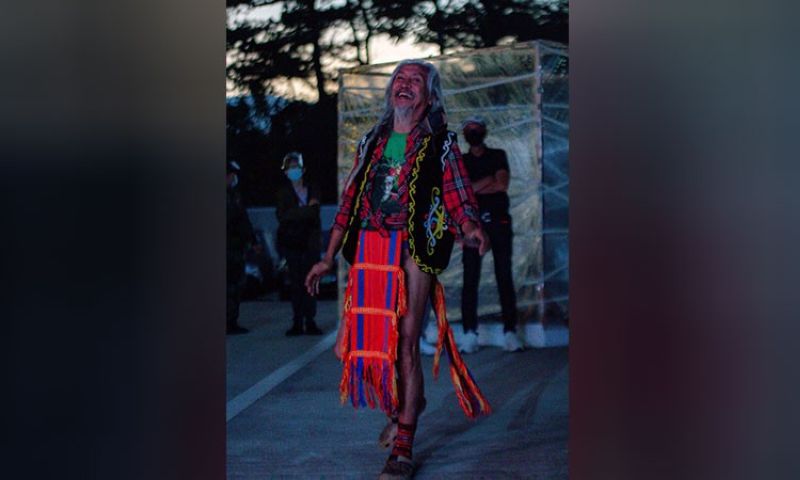 A COLLABORATION of excellence is seen at the Baguio Convention Center where art at its best gathers.

On display are larger than life works, which can be seen in a spectacle that aims to awe the twin billing of national artists BenCab and Kidlat Tahimk.

The piece dedicated to the Cordillera is described to be "envisages and immortalizes the local narratives of the Cordillera region, that are often overlooked in Western accounts in the past 500 years. Parallel to the progression from the predominant indigenous societies with carrying degrees of sophistication projected to the stratified influences from foreign aggression resulting in a shared cultural magnanimity, sovereignty, and legacy of our multitudinous national identity."

The statement of the art piece relives history as seen in varying perspectives dating back to "March 16, 20201, a day with a pool of meanings for two different countries and its people. The Filipinos, to which this day considered an introduction to European ideologies, assimilation of mindsets through western religious inculcation, and an eminent delineation of shared resistance by indigenous peoples across the archipelago. The Spaniards, to which this day was earmarked as the colonial voyage of the prevailing countries, demarcated by its huge maritime forces and Catholicism."

According to the artists, it is high time "to pivot the bases of our holistic selves from the deceptive Western-centric phrasing of "discovery" of the Philippines. Instead, focus our vision of national identity within our shared native heritage and a pragmatic view of our colonial history. The notion of glocalization of indigenous individualities will essentially be our basis for our economic, socio-cultural, environmental, and political systems and practices for sustainable development."

The artists collaborated for the shared mural to come up with a work depicting heritage and culture not only for the region but for the Filipino people.

Tatay Kidlat, National Artist for Film, presents work borne of a similar collaboration from artists which goes back to the Filipino identity 500 years since the Spanish came to the islands as a celebration of indigenous bravery or how the artist describes "Ang katutubong kadakilaan ng ating ninuno."

Kidlat's Ibagiw installations honor the resistance of our cultural warriors against the onslaught of foreign lifestyles.

It celebrates "kapwa culture" that counters the colonial values that are destroying our ancient coexistence with nature spirits.

The main wood figures are made by by Cris Atiwon while rattan vine Islanders woven by blind sculpture Rogello Ginanoy Igugao hut by Apilis Mahiwo, giant waves from bamboo bark of Mactan are by Randy Bulayo, bulol figures in Storytelling Class by elementary kids of Ujah Elementary school workshopped by Santos Bayucca, the Battle of Mactan Rattan Figures are woven by Jason Domiling and the Galleon Sai Collage is by Carlo Villafuerte.

Also at the BCC is the exhibit by 34 artists dubbed as "Interlinked: A Contemporary Art Exhibition by Baguio Artists," a mix of artists from various groups in the city who have come together to create a show for city's creative festival.

Woodcarvers who joined the competition already have their pieces on exhibit at the BenCab Museum in Asin Road. Judging will take place on November 21.

Winners for both competitions will be awarded at the Anido Night on November 30.

Mandeko Kito 2 will be on its second week on November 13 to 15. Local artisans and crafters will continue to offer and sell innovative products at the UP Oblation grounds at this artisanal market from 9 a.m. to 5 p.m.

Ibagiw Creative Crawls are also on offer through partner travel operators. These creative and garden crawls are fun and new ways to see both new and old spots in the city, that emphasize the theme of this year's festival to "Breathe in Baguio," while following all necessary health and safety protocols.

Art in the Park will open at the Sunshine Park, featuring a curated collection of artworks with the theme: "There is Still Life." The collection is a tribute to Philippine flora and its power to heal and become a continuing source of inspiration not only for artists but also for the public.

The Ibagiw festival is themed "Ibagiw 3rd Baguio Creative Festival: Angat Baguio Rising together through Creative Resiliency, Sustainability and Innovation," with over 400 artists to collaborate and display works of art for a month-long artistic exhibition staged at multi venues in the city.