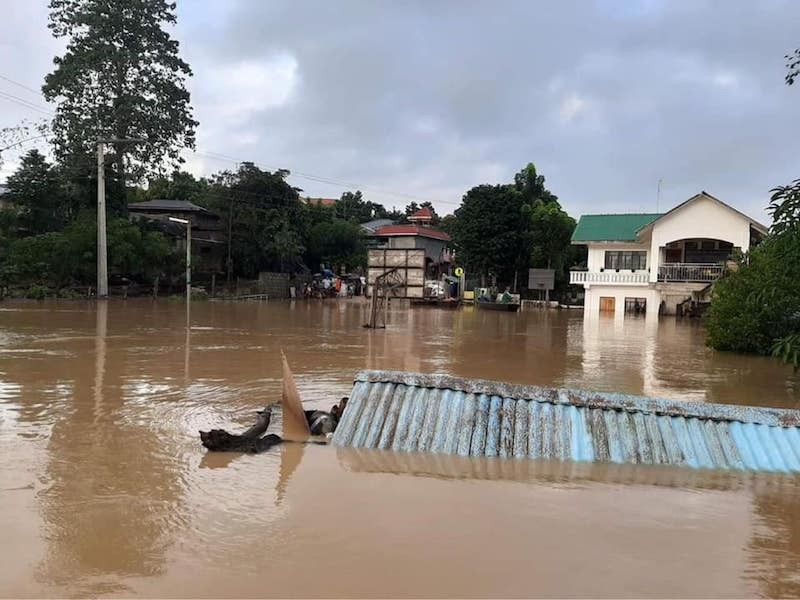 WHILE the release of a large volume of water from the Magat Dam could be easily blamed for the massive flooding in Cagayan and Isabela provinces, a town mayor pointed out that marine scientists have cited a combination of factors that contribute to the calamity.

Mayor Cristina Antonio of Alcala, one of the towns engulfed by floodwaters in Cagayan province, posted on Facebook Sunday, November 15, 2020, the findings of Dr. Fernando Siringan, former director of the UP Marine Science Institute (UP MSI) and UP geologist Keanu Jershon Sarmiento.

Antonio said the Alcala Municipal Government has started to implement changes based on the study.

In December 2019, the Municipality of Alcala, Cagayan experienced what they call a 100-year flood — one that has a one-percent probability of taking place each year.

Six barangays were totally submerged, more than 10,000 families affected, and more than 5,000 homes went underwater. There was no typhoon signal, just rain due to monsoon, and water coming from the Sierra Madre, water released by Magat Dam, water coming from everywhere.

We turned to our Filipino scientists to ask why. The Municipality requested Dr. Fernando Siringan, former director of the UP Marine Science Institute (UP MSI) and one of the country’s top river and marine geologists, to conduct a study on flood and riverbank erosion on the Cagayan and Pared Rivers in Alcala.

From July to September 2020, Dr. Siringan and fellow UP geologist Keanu Jershon Sarmiento travelled the length of the Cagayan and Pared Rivers in our town.

They looked at rocks and banks, the vegetation, the meandering of the rivers, the width of the channel and flood plain, the depth of the rivers all throughout, the flow of water, the facilities and communities impacted by flood and erosion through time.

The final study describes the confluence of factors that brings severe flood and suffering not just to the town and people of Alcala, but to all towns and peoples throughout the length of the Cagayan River from Isabela to Aparri, Cagayan where the river empties into the sea:

In Alcala, the river channel which goes as wide as 400 meters suddenly constricts to a 180-meter narrow from Bgy. Tupang all the way to Bgy. Magapit, Lallo;

In Alcala, the Pared River coming from Baggao and the Sierra Madre meets the big Cagayan River, causing a rise in water volume and backflow at the confluence;

Alcala is situated to receive 80 percent of water run-off in the Cagayan River Basin that encompasses Cagayan and Isabela;

Mountains, slopes and watersheds in the whole Cagayan Valley have been stripped of native trees that hold soil and regulate water release; and

Trees are cut down and forests threatened not only by illegal logging but by agriculture in slopes and mountains, particularly yellow corn farming and the use of herbicide that kills all vegetation and weakens the soil.

Steered by the Siringan & Sarmiento study, the Municipality of Alcala has started to implement changes.

We moved the Tamban Bangkero to a safer, more stable location upstream. We were shocked to learn that river current had eaten away at the cliff of the old Bangkero and could collapse to plunge people to the 18-meter swirling depths below.

To save Barangay Pagbangkeruan from being taken by the Pared River, we need to create a secondary channel in a way that the impact of water on the riverbank is relieved.

Then we have to plant a 30-meter-wide vegetation shield of native trees to form a belt of protection for the riverbank and community — a mighty, green wall. We had wanted to start this urgent work, but the rise of river water this rainy season had forestalled us.

Many other areas identified by the Siringan & Sarmiento along the Pared and Cagayan Rivers require similar work.

In the past two months, we have convinced the farmers in our twelve irrigation dam watershed areas to abandon yellow corn and to shift to agroforestry. We have started to plant native forest, flowering and fruiting trees on these watersheds that have a combined area of 300 hectares.

We have engaged our 25 barangays to plant tiny, dense, native forests in their communities, using the Miyawaki method.

We are set to plant native forest and flowering trees on all Alcala roadsides that span around 120 kilometers.

But the biggest, most challenging work of all, the one most urged by Dr. Siringan, is the river channel widening from Tupang, Alcala to Magapit, Lallo.

This work would help not only Alcala, but the whole Cagayan Valley Region, tremendously. This is not a new idea — this is one of the recommendations of the 1987 JICA Report on flood and the Cagayan River. Sadly, this has not been acted upon.

My insight is that the problem of flood in Alcala and Cagayan Valley cannot be attributed to just one cause outside of us, but to a complex, interrelated web with us right at the center.

It’s not just about Magat Dam protocols, although in our state of despair Magat Dam is the most visible target.

It’s about us, it’s the way we live — as if we are apart from nature, as if what we do does not come back to us. It’s us — how we have cut our trees and destroyed our forests, our soil and groundwater, how we have eaten up the land with farms and buildings.

The problem being complex, the solution is also a combination of interventions that should be anchored on science and drawn after scientists have studied the Cagayan River itself, after they have walked its banks, felt its current, followed its meander, and seen it in its ebbs and flows.

It is not dredging every which way, it is not putting up a dike here and there. It is knowing, based on sound science, what to do and what not to do where in the whole length of the mighty Cagayan River, the longest and largest in the country.

I believe in Dr. Siringan. I believe in our Filipino scientists. They stand by their science, and the people of Alcala are glad to lean on their strength. Here in Alcala, we will do as the study says. By God, we will do it. But I hope we do not have to do it alone.

As I write this today, November 15, 2020, my beloved town Alcala and many parts of Cagayan are underwater.

The 100-year flood that is supposed to happen only every one hundred years happened again after eleven months. Our people are suffering. They are cold, tired, hungry, thirsty, their homes gone, their crops gone, their animals gone, their belongings gone.

But there is hope, because we the people of Alcala know what to do. We know the way forward. The path has been laid before us, we just need the courage and will to take it.

I hope our leaders, and all of us, will help to save Alcala, and the whole Cagayan Valley. Please, let us listen to our scientists.