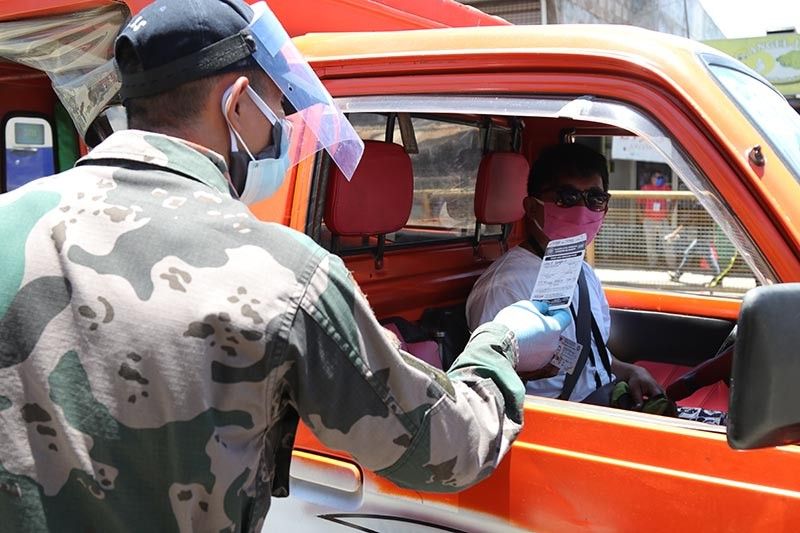 IT’S BACK. Under Executive Order (EO) 62, the city government brings back the food and medicine pass (FM Pass). On social media, several Dabawenyos have stated that they lost or misplaced their FM Pass. the EO seeks to prohibit non-essential activities. (Photo by Mark Perandos) 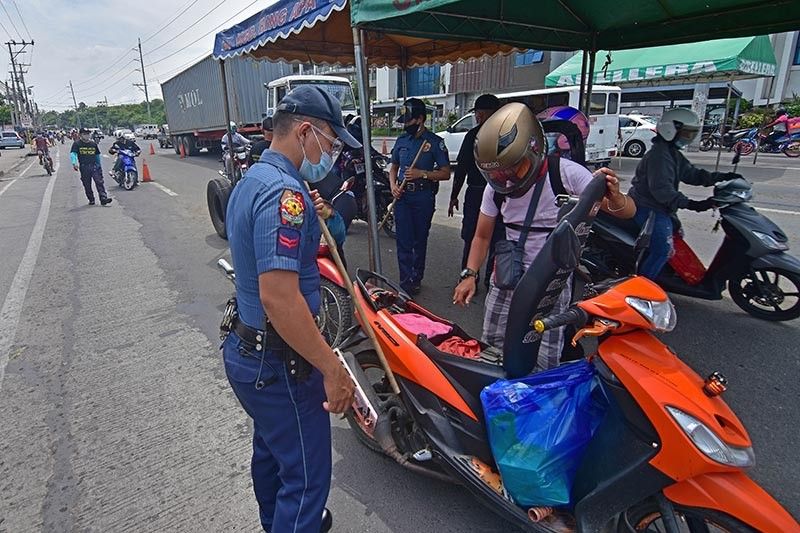 RESTRICTED. Effective 5 a.m. on November 18, the city will be limiting non-city residents to come in and out of the city. As a restricted local government unit, those entering the city will be required to present several documents, which can be viewed on the city government of Davao’s official Facebook page. (Photo by Macky Lim)

FRIDAY the 13th is considered an unlucky day in Western superstition.

In Davao City, it came off as shocking news and to some, bad news, after Dabawenyos were caught off guard Friday evening, November 13, with not only one, but two executive orders (EO) issued by the Davao City government as another batch of stringent measure in response to the continuing surge of Covid-19 cases in the city.

Under EO 62, the city had strictly defined “essential goods and services” as "all goods and services relating to the human need for food, medicine, medical dental, and allied-medical services, health and wellness, money, work or shelter."

This EO also brought back the food and medicine (FM) pass, the city's version of a quarantine pass, which would only be used by those who will be going out to buy food or medicine or would go to the hospitals or clinic.

This was already lifted by the city mayor, along with the 9 p.m. to 5 a.m. curfew on August 3 this year, a month after the city shifted to modified general community quarantine (MGCQ).

Duterte-Carpio said in a previous radio interview that this was a move to test Dabawenyos’ ability to "self-regulate."

Based on the current Covid-19 numbers released by the Department of Health in Davao Region (DOH-Davao), the numbers were not looking good. The lifting of movement restrictions, as expected, resulted in a surge of cases in the city beginning September. The spike of cases was even more evident in mid-October this year.

Based on the city's contact tracing history during those periods, most patients got infected with the virus from gatherings and other extracurricular activities, which are mostly done after work hours.

Based on the recent trend, the Covid-19 transmission was no longer just within homes or small communities but is now also in establishments and within offices.

Unlike in the previous months wherein case surges were highly attributed to returning overseas Filipinos (ROFs) and locally stranded individuals (LSIs), with the recent situation on the ground, almost 100-percent of daily recorded cases are local transmissions.

Duterte-Carpio aired her disappointment with the recent Covid-19 situation on the ground, which resulted in the City reimposing stricter measures in public movements.

Since the Covid-19 pandemic hit Davao City in March this year, the city has a total of 5,114 cases, as of November 14, with 3,142 already recovered and 216 succumbed from the virus. There are also 1,762 active cases or those who are still recovering.

With the continuous surge of active cases in the city resulting in the full occupancy of Covid-19 beds in the Southern Philippines Medical Center (SPMC) and the almost-full capacity of Covid-19 wards of other hospitals, Duterte-Carpio said there is a need to intensify the prohibition of non-essential activities -- amusement, entertainment, leisure, and gaming -- while the city is still under a quarantine status.

Unless there would be a huge decrease in active cases in the city, she said the public can expect tighter restrictions.

Under MGCQ, the mayor said there should be unnecessary movements and the public must still remain in the comfort of their homes while there is still an existing pandemic.

As she reviewed the Inter-Agency Task Force on Emerging Infectious Diseases (IATF-EID) guidelines, some of these do not fit in an area placed under MGCQ.

With this, the mayor deemed the need to clearly define "essential travels" through an executive order, which is now defined under EO 62.

Davao City, being the Covid-19 hotspot in the entire Davao Region, has continued to open its borders to neighboring local government units (LGUs) and other neighboring provinces.

Effective 5 a.m. of November 18, the city will be limiting non-city residents to come in and out of the city after the Regional Inter-Agency Task Force (RIATF) in Davao Region approved on November 12, 2020, the request of the Davao City Covid-19 Task Force to place the city as a Restricted LGU.

According to EO 63, "there is a need to seek the assistance of Joint Task Force (JTF) Covid Shield for enforcement of authorized persons outside residence (Apor) and non-Apor travel into Davao City to insulate other LGUs from the effect of the surging cases in the city as well as to further protect the residents of Davao City."

All Apors via land and air travel are mandated to submit several requirements before they will be allowed entry to the city.

The city earlier reimposed the curfew, this time, from 7 p.m. to 5 a.m. effective October 15, then followed by the reimposition of the 24-hour liquor ban beginning November 2.

The city also issued EOs regulating mass gatherings and the mandatory alternative work arrangements for both private and public sectors.

SunStar Davao asked netizens about their reactions to the recent reimposition of the FM pass, liquor ban and curfew in the past few weeks. The majority of the reactions were unfavorable.

Most netizens saw this move as an additional burden, especially for workers and the business sector.

Although some thought this as a better means of regulating the public movement as compared to the SafeDavao QR (DQR) code, which until now, has not been enforced due to technical glitches and errors currently being addressed by the program developers.

Duterte-Carpio previously said the DQR will be in substitution for the FM pass. The mayor has not issued any statement if the FM pass will be discontinued once the QR code system will be fully operational.

The city was placed under ECQ in early April this year following the first case of local transmission in the city. Under an ECQ, it is a "hard lockdown," wherein most establishments and offices are closed and only a few people are allowed to go out for strictly essential purposes.

Duterte-Carpio already mentioned several times that the city will not be going back to ECQ as this would disrupt business establishments and its workers who are dependent on their operations.

Ponti Carlo Aranda, a business owner and a medical-course graduate, deemed the regulations as beneficial in the side of the Covid-19 prevention.

He said the major downside to this scenario is in the business sector.

"Business owners have not fully recovered from their losses. With the new EOs issued, this will once again take a heavy toll on their sources of income," Aranda said.

Being in the shoes of the local government, he understands their dilemma.

"As of this moment, we are on the brink of asking ourselves -- stop [Covid-19] or save the economy," he said, adding that achieving both goals would be unrealistic at this point.

He said business owners would have no choice but to be resilient enough to improvise marketing strategies to keep their businesses running.

Berchan Angchay, a former TV reporter and now owner of a milk tea shop that started to operate in late September, also said that while these measures would help address the worsening Covid-19 situation of the city, this will burden them further as these might pose risk on their business.

"Our sales would be affected, especially that most of our customers are from dine-in. This had helped improve our sales," Angchay said.

Since the curfew was reimposed in mid-October, he said this had somewhat gravely affected their sales.

Angchay said they would instead focus on online deliveries to cope with the new changes.

Despite the earlier reimposition of the curfew, liquor ban and the regulation of mass gathering, Covid-19 cases have continued to increase.

Data from the DOH central office showed Davao City topping areas in the country with the most recorded new Covid-19 cases in a single day.

According to Dr. Jack Estuart, former medical director of Brokenshire Hospital in Davao City, the reimposition of the curfew did not bear a reduction of active cases and has even surged.

In the city government's defense, the continuing increase of cases should be seen from a different perspective since these can be attributed to the local government's intensified contact tracing especially within the communities.

Lopez also said the public should not be alarmed since these figures cannot be considered as alarming, as the increasing trend of recorded daily cases is not consistent.

Despite this, there should be no room for complacency as the public must continue to abide by the government's mandate and minimum health protocols to curb the spread of the virus.

With the uncertainty of the pandemic, there is no telling how things will turn out in the coming days, months or even years. While all hope lies in the vaccine, which remains under clinical trial, curbing the spread of the virus would entail sacrifice, cooperation and a prayer that one day this too shall pass. For now, the end of the Covid-19 lies within how the government will implement its guidelines and how the public will respond to these measures.